It’s odd how one can think one knows a London neighbourhood and then discover that an enormous chunk of it has disappeared for redevelopment.   This is true of the massive site immediately opposite Spitalfields Market which was previously a multi-storey car park (I remember that) and the London Fruit and Wool Exchange, a not especially distinguished 1920s classical building which opened in 1929 for fruit and vegetable auctions.   The façade facing on to Brushfield Street has been kept and looks faintly surreal, propped up on the other site of the vacant building site which is being redeveloped by Rab Bennetts:- 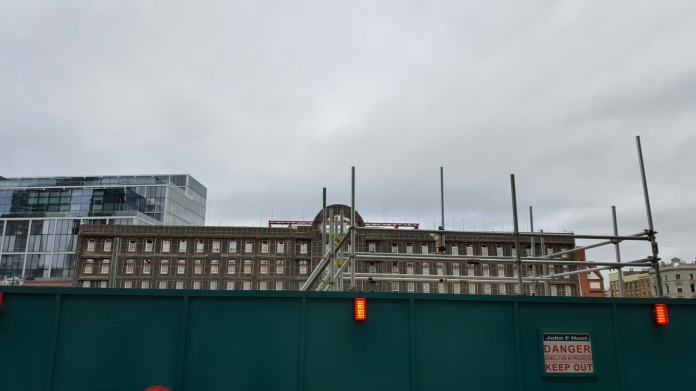 Since he is such a loyal and knowledgeable commentator on my blog, I have been reading the book that Mark Fisher wrote jointly with Richard Rogers and published in 1992, presumably as a prelude to the General Election which Labour was expecting to win.   It is interesting being reminded of a period when London was lagging far behind the municipal planning of European cities, with no grand projets and a sense of general decay and decline in its public realm, not least in Hoxton which is used as a case study.   Much of what they advocated has now been implemented (one wonders how much as a result of their passionate advocacy):  better use of the river;  a greater interest in architecture;  more international competitions;  bicycle lanes.   There is a Mayor with responsibility for co-ordinating policy in the boroughs.   There are more street markets.   Cultural institutions have been renovated through the lottery.   Schools have been renovated through central government funding.   Now the big issue is affordable housing, which was a big problem then and a bigger, more intractable problem now.

We heard about Libreria from the man who made the cocktails at its opening.   It’s the new, über-trendy bookshop in Hanbury Street with mirrored black ceiling and yellow, packing case shelves and stock which is categorised according to unconventional subject matter rather than traditional subject headings.   They don’t allow wi-fi and photography is banned, so the only way I can record it is by a picture of its paper bag:- 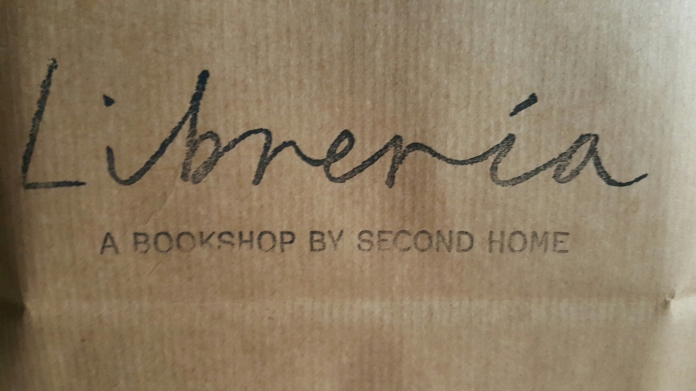 I have occasionally driven past the Green Lanes Pumping Station, a mad, grand Scottish baronial folly which was designed by Robert Billings in 1856 to draw water from the adjacent reservoirs which had been laid out in the late 1820s to supply water to central London.

I had never been to Abney Park Cemetery, London’s first non-denominational cemetery, opened in 1840 but never consecrated, although it has a prominent, now derelict Gothic chapel designed by George Hosking.

One enters by the Egyptian gates designed by Joseph Bonomi junior:- 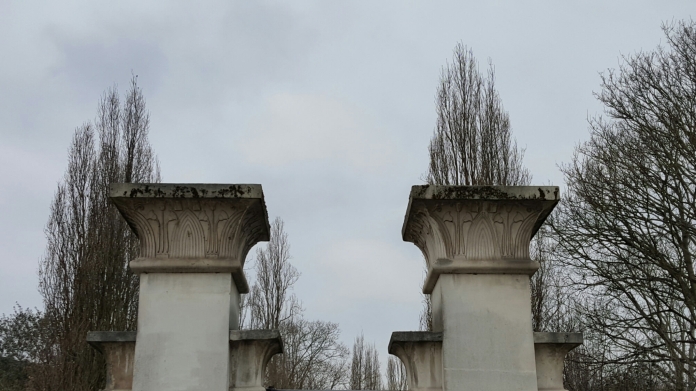 END_OF_DOCUMENT_TOKEN_TO_BE_REPLACED

Since I had to be in Archway at noon, I decided to take the slow route and walk from Stoke Newington to Highgate by way of the so-called Capital Ring, a footpath that circles inner London.   It’s surprisingly rustic, some of its route following the track of the old Edgware, Highgate and London Railway, which was due to be joined up to the Northern Line in 1940 until war intervened.   It was then going to be turned into a motorway.   It’s now just a footpath.   There’s something faintly eerie approaching Highgate Woods not by the Archway Road or the Northern Line, but along the track of an old railway, passing the phantom station of Crouch End:- 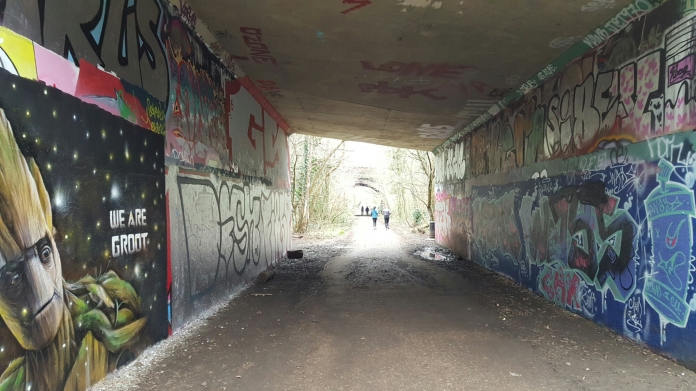 Since I was due to attend a meeting in Thurrock, I thought I would get a sense of the area and visit Bata-ville, the early modernist development in East Tilbury, which was laid out in green fields east of Tilbury in 1932.   The local vicar invited Tomas Bata to set up a shoe factory in order to provide employment during the recession.   Bata employed the Czech architects Vladimir Karfik and Frantizek Gahura to draw up a masterplan for a company town complete with parks, factories and dormitories for the single workers.   There is a heroic statue of Tomas Bata who was killed in an air crash in 1933:- 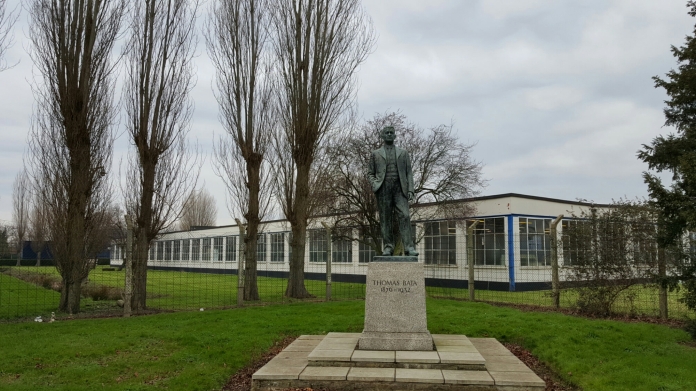 END_OF_DOCUMENT_TOKEN_TO_BE_REPLACED

In recent years, I’ve got to know the people at Debrett’s, who publish People of Today, which has always been a tiny bit more democratic than Who’s Who.   It was first published in 1982 and used to sit on the shelf besides Who’s Who in those long-forgotten, pre-digital days when one needed to find out who somebody was, their career and what they had published, plus hobbies.   The firm was founded by John Debrett, the son of a Huguenot cook, Jean de Bret.   Debrett worked for John Davis, a bookseller in Piccadilly.   The New Peerage first appeared in 1769, a year after the Royal Academy, and maybe belongs to the same era of grand systems of social stratification and the policing of professional boundaries.   Now, they have set up a foundation which is dedicated to doing precisely the opposite, encouraging young people from underprivileged backgrounds to go to the best universities.

I’ve done blogs on Somerset House before.   One of the pleasures of working in Blackfriars is that it provides frequent opportunity to walk through its monumental courtyard, free now of the parking of tax officials and I prefer it free of skating, so that one can see and appreciate the qualities of William Chambers’s restrained style of scholarly French classicism, informed by his training in Paris under J.F. Blondel and his studies in Rome, together with sculpture by the first generation of RAs:- 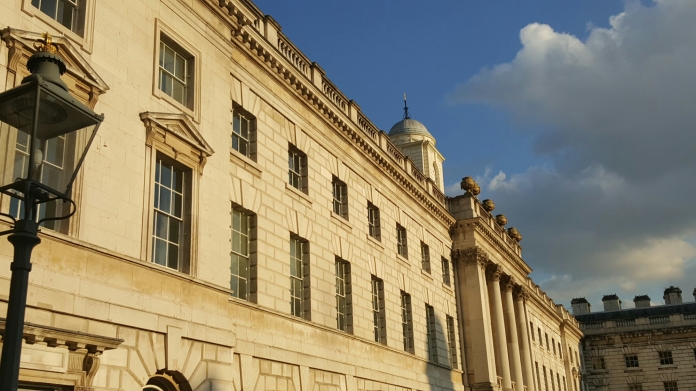 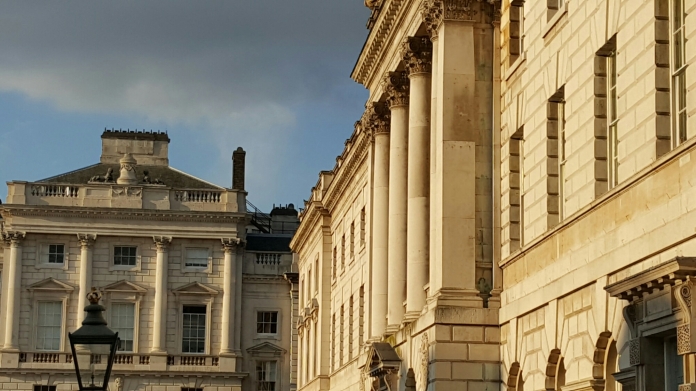 END_OF_DOCUMENT_TOKEN_TO_BE_REPLACED

I had a meeting in Knightsbridge first thing this morning which I walked to across Green Park.   It’s an oddly indeterminate shape, an empty bit of grass and trees alongside the rushing hoardes down Constitution Hill.   I was surprised by a) how empty it was b) how attractive it is that it leads from nowhere to nowhere and c) how spacious it can feel with trees and what is nearly a field, so that you can lose any sense of London fragmentarily:- 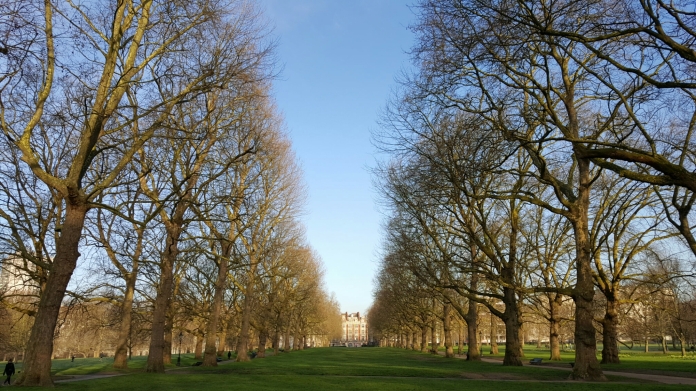