We went this afternoon to the Paul Nash exhibition at Tate Britain.   We felt he was never completely convincing as a painter – a bit too dry, too graphic, and as the exhibition demonstrates, a bit too susceptible to outside influences.   I was pleased to discover on getting home that I have a copy of his Shell Guide to Dorset, which I see I bought rather expensively and is in shabby condition (Travel and Topography is housed in a damp cupboard).   It is illustrated on the title page with a picture of a Scelidosaurus, which one is presumably unlikely to run into in Dorset, even in the 1930s, includes a section on SPORT by Brigadier-General F.R. Patch with a listing of all the golf courses, and is dedicated to THE LANDOWNERS OF DORSET, THE COUNCIL FOR THE PRESERVATION OF RURAL ENGLAND, THE SOCIETY FOR THE PROTECTION OF ANCIENT BUILDINGS AND ALL THOSE COURAGEOUS ENEMIES OF ‘DEVELOPMENT’ TO WHOM WE OWE WHAT IS LEFT OF ENGLAND.

I suppose it is inevitable that one is ruminative as the old year passes into the new.

At our Christmas Eve dinner, we were encouraged to reflect on what the experience of 2016 has been.   It has been a ghastly year.   The first since 1979, in my adult lifetime, when there has been a big shift in the public and political mood towards the unpredictability and ominousness of the future and the possible irrationality and destructiveness of democratic choice:  moving away from the postwar European settlement, formed in order to prevent the possibility of there ever being another European war;  a strange, hoodlum President taking the helm of what has been considered the greatest country in the world.

On the other hand, I’m enjoying slipping into the New Year with Waterlog:  A Swimmer’s Journey through Britain as Roger Deakin describes ever more adventurous and arduous swims, off the coast of Dorset, in the Dales of Yorkshire and now on Jura.   There are more books to look forward to, by Deakin and other authors.

Having spent the morning struggling with the very complex building history of Chiswick, I have realised that the building of most of the temples in the garden actually preceded the construction of the villa, beginning with a bagnio designed by Burlington himself in 1717 and illustrated in Vitruvius Britannicus as ‘the first essay of his Lordship’s happy invention’.   The bagnio and other small-scale garden buildings at the end of the vistas of the patte d’oie were followed not long afterwards by the building of the small Ionic temple which happily survives and which, from my reading of an article by Cinzia Sicca in the Journal of Garden History (Spring 1982, pp.36-69), was designed by Colen Campbell, who was at least responsible for overseeing work on it while Burlington was travelling in Italy in September and October 1719.   But I’m happy to be corrected on this by my correspondents.

Meanwhile, I’m posting an atmospheric view of it which I took after eating breakfast:-

Remembering that I have to give a talk on the third Earl of Burlington some time in mid-January, I thought I would make an early morning expedition out to Chiswick House, the villa which he constructed in the late 1720s – it was completed in 1729 – as a weekend retreat, to house his art collection and demonstrate his knowledge and expertise in a strict form of Palladianism, drawn up and designed with reference to a detailed study of I quattro libri.

Unfortunately, the house is closed (I knew that) and the garden was full of oriental floats for a production of Cinderella.   But it’s hard to resist the beauty of the house in the morning frost:- 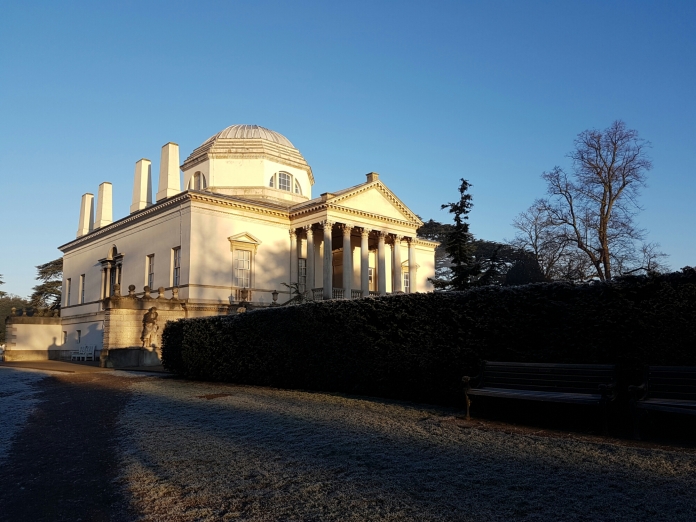 END_OF_DOCUMENT_TOKEN_TO_BE_REPLACED

Spending more time indoors has made me more attentive to what survives of the old house which was here before we moved in – a house turned into a carriage works and then a garage.   We have always tried to work out the history of the wall surface of the dining room which is a composite of wood, fabric and maybe streaks of surviving wallpaper:- 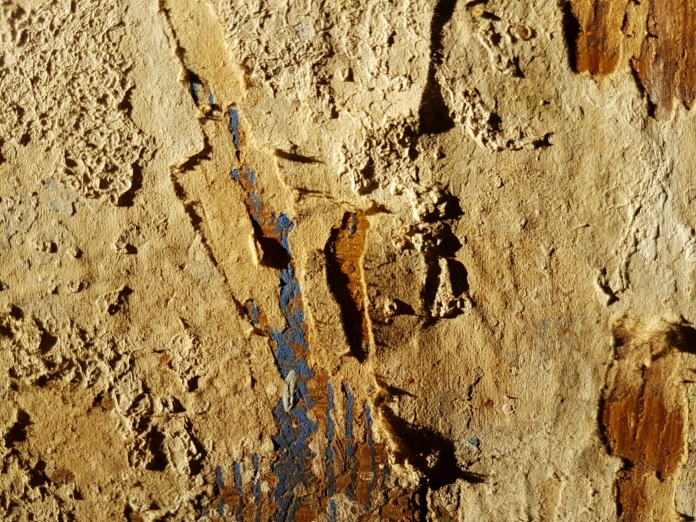 END_OF_DOCUMENT_TOKEN_TO_BE_REPLACED

There’s a very good account of David Pye’s life and work in the DNB by Rosemary Hill, who interviewed him in the Guardian in 1986.   The son of a wine merchant who made jewellery in his spare time and nephew of Sybil Pye, the bookbinder, he went to Winchester, which perhaps contributed to the austerity of his intellect, and then to the AA before the war, where he turned against modernism towards boatbuilding and working in wood.   After the war, he was recruited by Dick Russell, Gordon’s brother, to teach at the RCA.   He wrote, ‘Little is ever said which touches on the fundamental principles of useful design, and what is said is often nonsense’.   What he wrote was not nonsense, but astringently thoughtful about the processes of making.

The cold and fog have kept me indoors which has meant that I have now finished Wildwood:  the second half concerned not so much with the woodland and coppices of Suffolk, Devon and the Forest of Dean as central Australia and the apple trees of Kazakhstan.   But I’m pleased that he ends with David Pye, the Professor of Furniture Design at the Royal College of Art, whose book The Nature and Art of Workmanship was published in 1968, the year that Deakin drove his sky-blue Morgan from Bayswater to Mellis in Suffolk, where he lived until his death in August 2006, four months after he had completed Wildwood.

My Christmas has been greatly cheered by reading Roger Deakin’s Wildwood: A Journey through Trees, as recommended by one of my readers (thank you, Simon).   I feel I should have known about Deakin:  an extraordinarily eloquent and passionate writer about natural life, who as a schoolboy at Haberdashers’ Aske’s first went on expeditions to the New Forest to make detailed records of its flora and fauna.   He read English at Cambridge, where he was a pupil of Kingsley Amis, and his book is peppered with literary references:  Gerard Manley Hopkins;  Konrad Lorenz;  Charles Waterton, the author of Wanderings in South America;  Nabokov, who was an entomologist as well as a novelist, working at the Harvard Museum of Comparative Zoology;  William Cobbett, of course;  and John Ruskin.   But what is impressive about the book is not the depth of his reading, but the sense of independent thinking and endless curiosity about the natural world.

I have been fretting having mentioned the word Amazon on my blog, because, although I know its labour practices are loathsome, I can’t disguise that I love the immediacy of its choice, the fact that you don’t have to pay postage (we’re on Prime), and the fact that it can intuit one’s interests such that I have more than once been encouraged to buy books that I myself have written, which maybe doesn’t require a very complicated algorithm.   So, I have to console myself that a) it surely must have helped to keep the printed word alive such that, five years ago, all publishers were predicting the demise of the book which, thank god, hasn’t happened and b) it hasn’t in any way reduced my addiction to small-scale independent bookshops of which there are three in Broadway Market alone, not just the Broadway Bookshop, but Donlon Books which is more specialist and often closed, and Artwords, halfway up on the right, which does art, cooking and illustrated books.   And Libreria, the new bookshop on Hanbury Street, features in my book, but only with a picture of their paper bag as they don’t allow photography.

I have always been a bit cautious about mentioning the book of the blog, being sceptical of its reality and superstitious that something would go wrong before it saw the light of day.   But now I have discovered that it is available to pre-order on Amazon, just above my great-grandfather’s book, Obstacles to Missionary Success.   There was a minor battle about its cover as to whether it should be pictorial or typographic.   Typographic won, with a reference to the maps down the spine.   Publication on April 27th.   The Amazon entry doesn’t mention that there are c.500 photographs.