I was struck by the stillness of the water on the canal this morning and took a photograph from under one of the bridges, but instead of the water it shows the reflection of a 1970s block of flats, an odd optical illusion:- 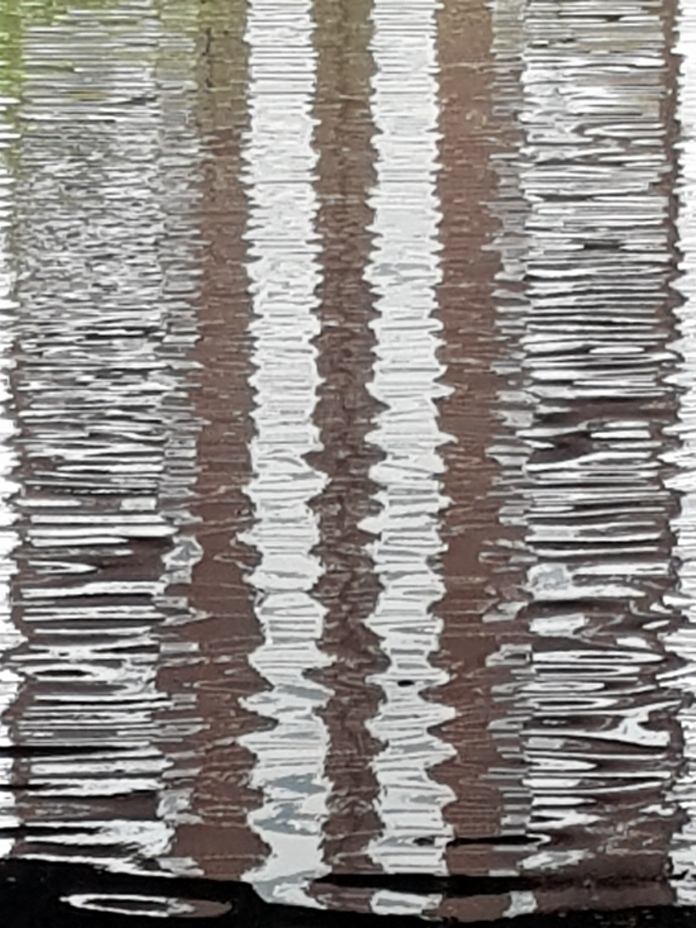 I have been reading Martin Gayford’s admirable and extremely readable Modernists & Mavericks: Bacon, Freud, Hockney & the London Painters which has taught me a great deal about the London art world in the 1950s and 1960s, which I didn’t know. Not least, it has made me understand the milieu in which Gillian Ayres was trained, as depicted in a photograph of her sitting in a Camberwell pub surrounded by earnest (and possibly admiring) young men:- 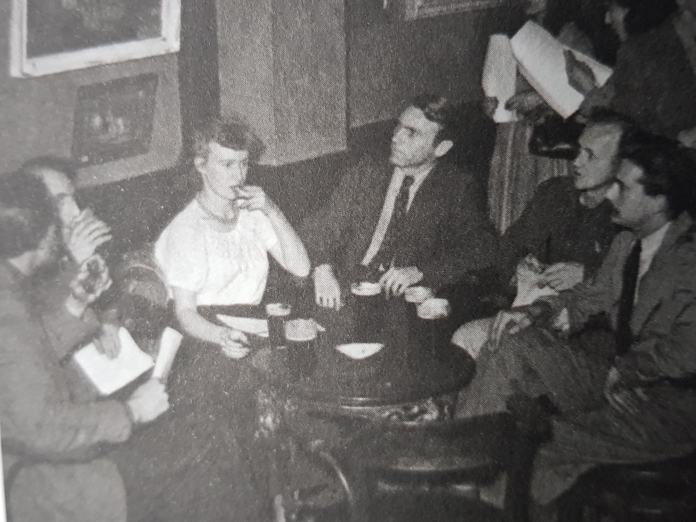 And later in her studio in Chiswick Mall:- 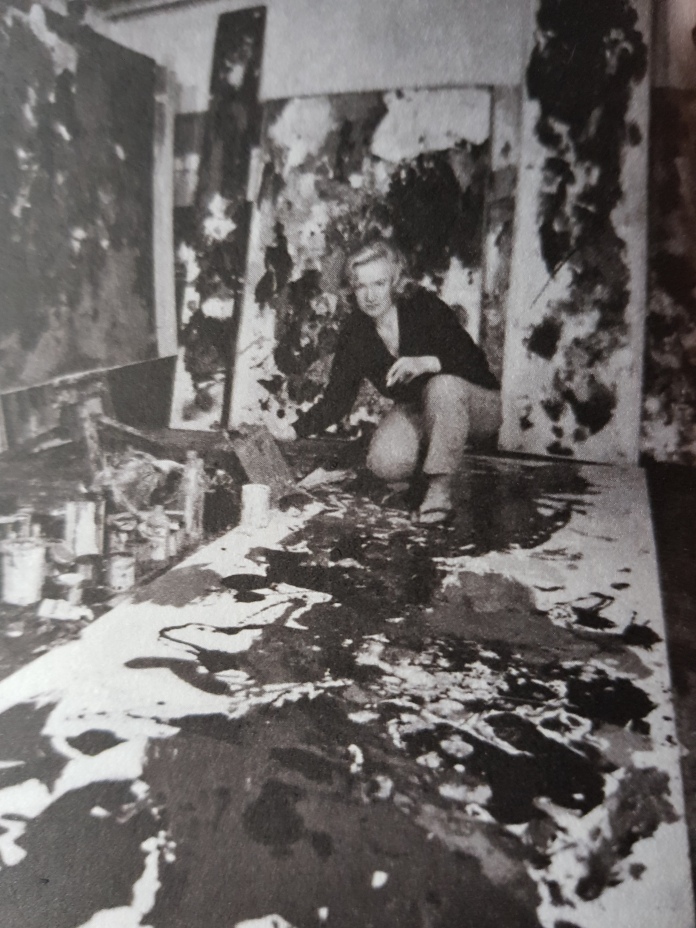 I like the description of Carnaby Street by the Menswear Association as ‘codswallop fashion of perverted peacocks’ and Francis Bacon’s quotation of Paul Valéry that ‘modern artists want the grin without the cat’. It gives as a whole a sense of the interrelatedness of the London art world, its smallness, and how some of the great figures, including Freud and Hodgkin, took so long to be recognised.

A week ago, we were invited to lunch by some people who were going the next day to Hong Kong. They offered us a bouquet of flowers which they were not going to be able to enjoy of such extraordinary magnificence that I wish to preserve its memory:- 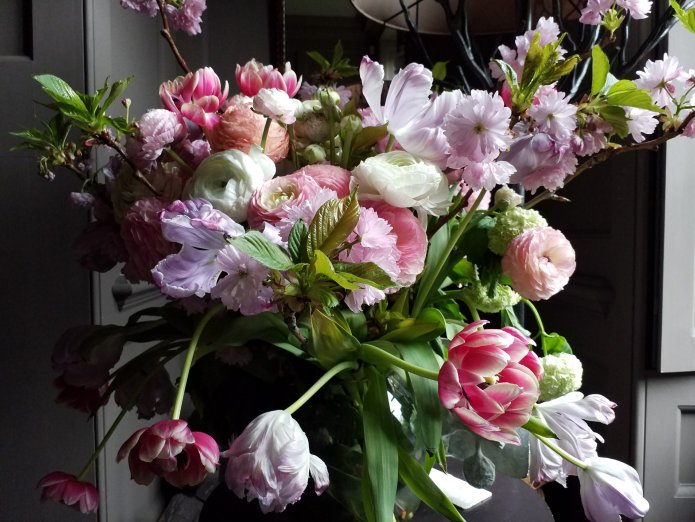 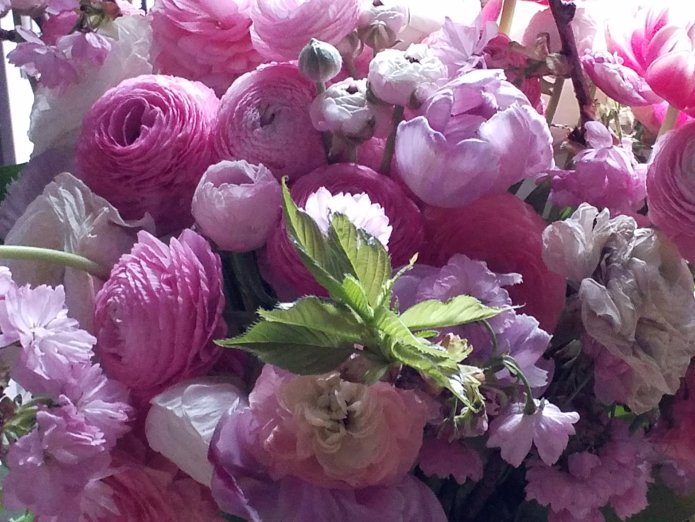 Although I’ve never actually succeeded in logging on to the Times account, there is a good and clear account of the fundraising involved in our great building project in this morning’s Saturday Review by Richard Morrison, the Times music critic and a veteran of arts reporting (https://www.thetimes.co.uk/article/raising-the-curtain-on-the-new-royal-academy-hhglf77f7). It makes clear that we are still a bit short on the final amount we need to pay for the building. As of yesterday, we had raised £2,658,159 of the £3 million public appeal. 89%. It’s not too late to give on https://makeyourmark.royalacademy.org.uk

In answer to the question as to who were Cotton, Ballard and Blow, who designed Grosvenor House on Bennets Hill in central Birmingham, the answer seems to be that they were a firm of successful speculative architects, originally based in Birmingham, where Jack Cotton, one of the partners, was a well known property developer, without architectural training, who was said (by the Spectator in 1959) ‘to have done much building in Birmingham, little if any of which is said to have improved the look of that city’. They also worked in London where they were ‘responsible for much of the unimaginative and uncoordinated building in the new Notting Hill Gate’, as well as a scheme for developing the north side of Piccadilly. A member of the firm, Major ‘Trof’ Trofimov, the son of the Professor of Russian at Manchester, worked for them before taking over their practice in Newcastle. It sounds like they were prime suspects in the murky world of 1950s property development, but, like Seifert, were capable of producing occasionally interesting – as well as frequently appalling – buildings.

I had dinner last night in an amazing piece of Birmingham constructivism, not Festival of Britain, but Czech cubist.   It might have been lifted straight from Prague.   It was a speculative office development, designed by Cotton, Ballard and Blow (Cotton was a property developer), dated 1953, and originally occupied by Shell-Mex BP:- 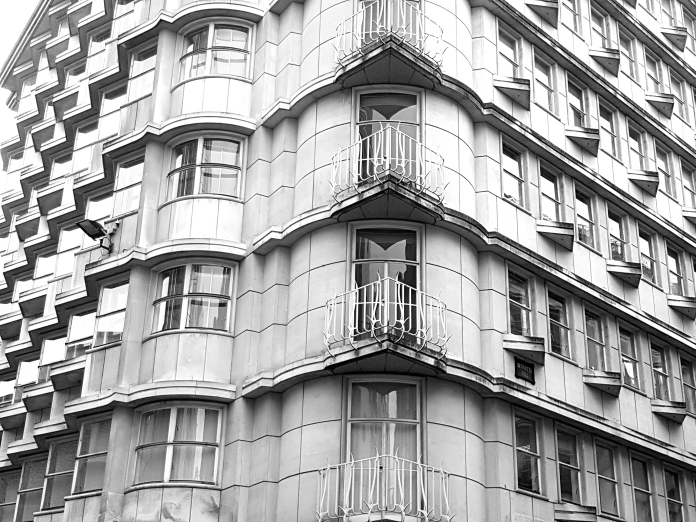 Strange how the wetness of the day brings out the character of the Burlington House façade.   Or is it just that I’ve become more alert to it, having lectured on it at the Barber Institute last night ?   Pennethorne was sufficiently impressed by it to have partially modelled his Burlington Gardens façade on it, after parliament had torpedoed his horrid gothic design (it was already three foot above ground before being vetoed):- 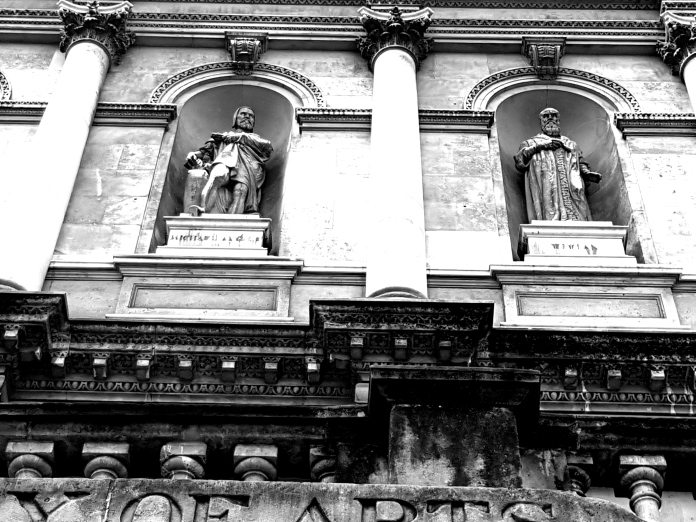 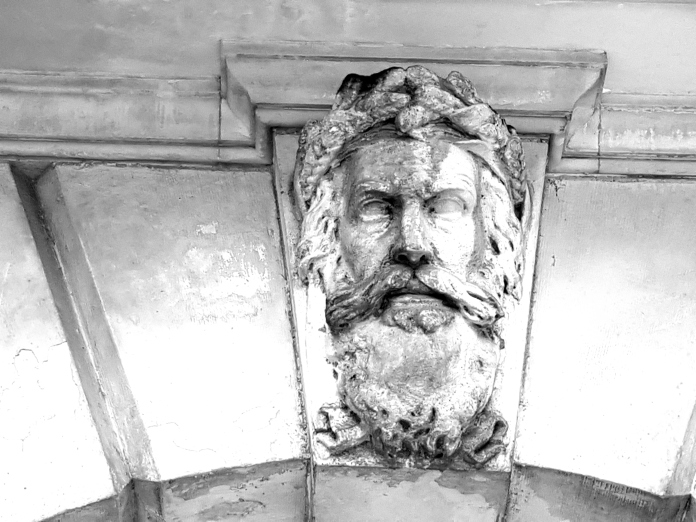 On a visit to the current Google HQ just north of King’s Cross (we glimpsed a model of the new one planned by Thomas Heatherwick RA), one has to sign an affidavit that one will not take photographs.   But I was given special permission to take photographs from the balcony outside the Ninth Floor which has a fairly spectacular view out over the St. Pancras station train shed, designed by William Barlow, the Midland Hotel, Gilbert Scott’s masterpiece, John McAslan’s recent additions to King’s Cross, the Crick Institute, and the rest of central London to the South Downs in the distance:- 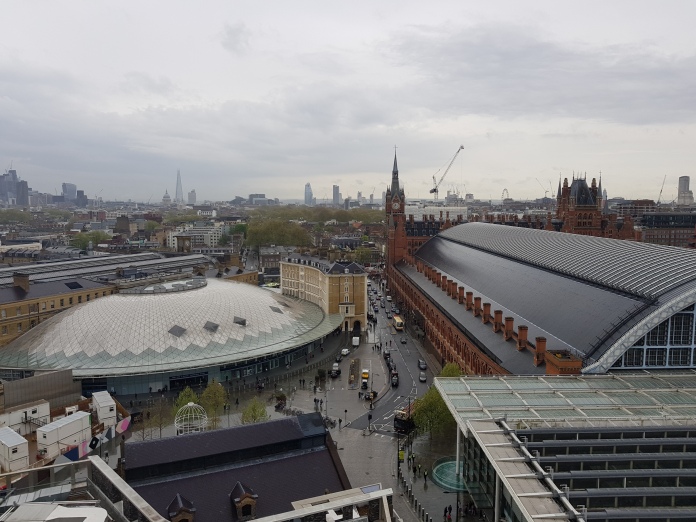 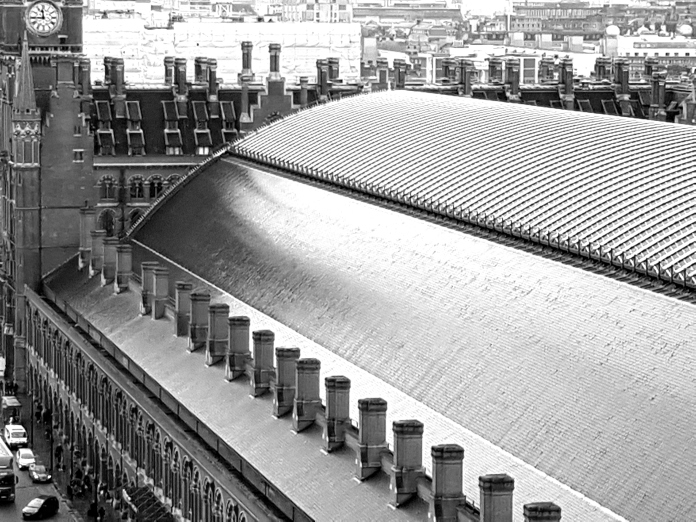 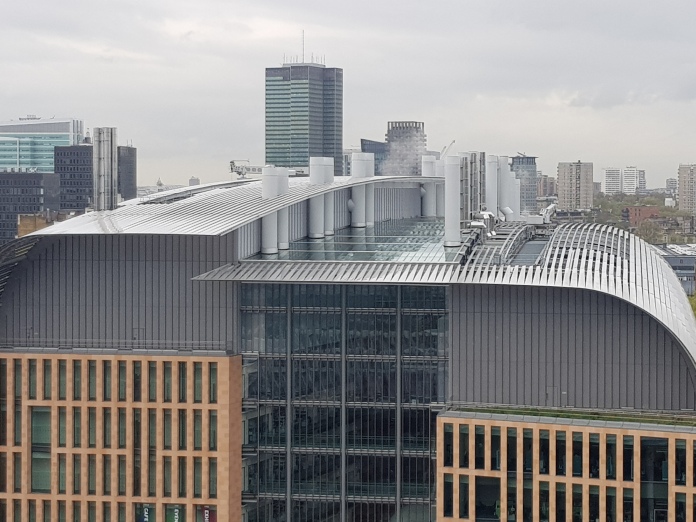 Downstairs the Barber has a case display of Royal Academy exhibition catalogues from their library, beginning with an early listing of the works in THE THIRD exhibition, held in 1771:- 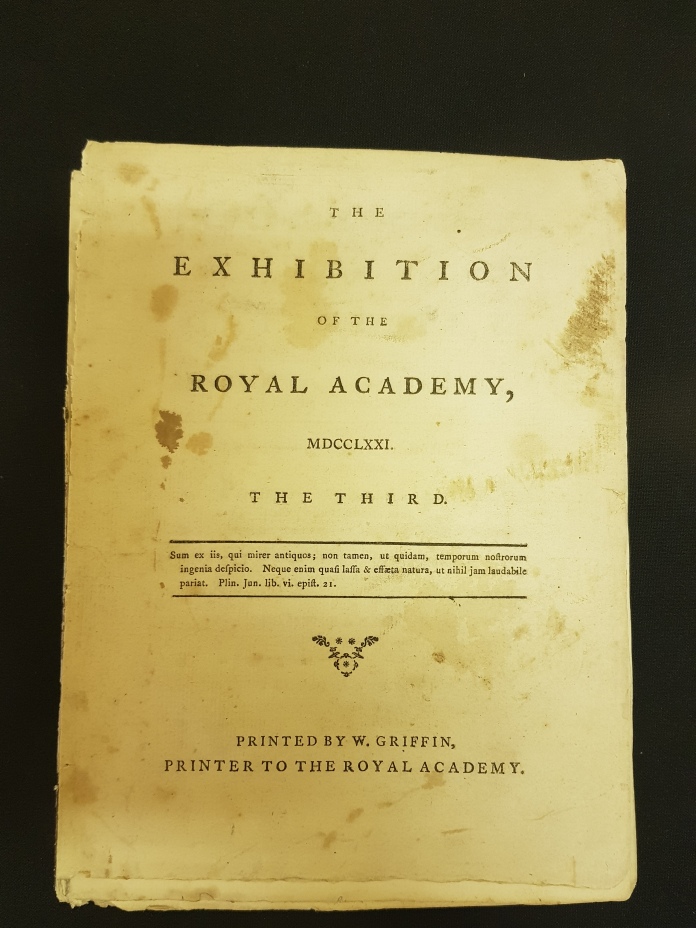 The catalogue had shrunk to a handlist by 1880:- 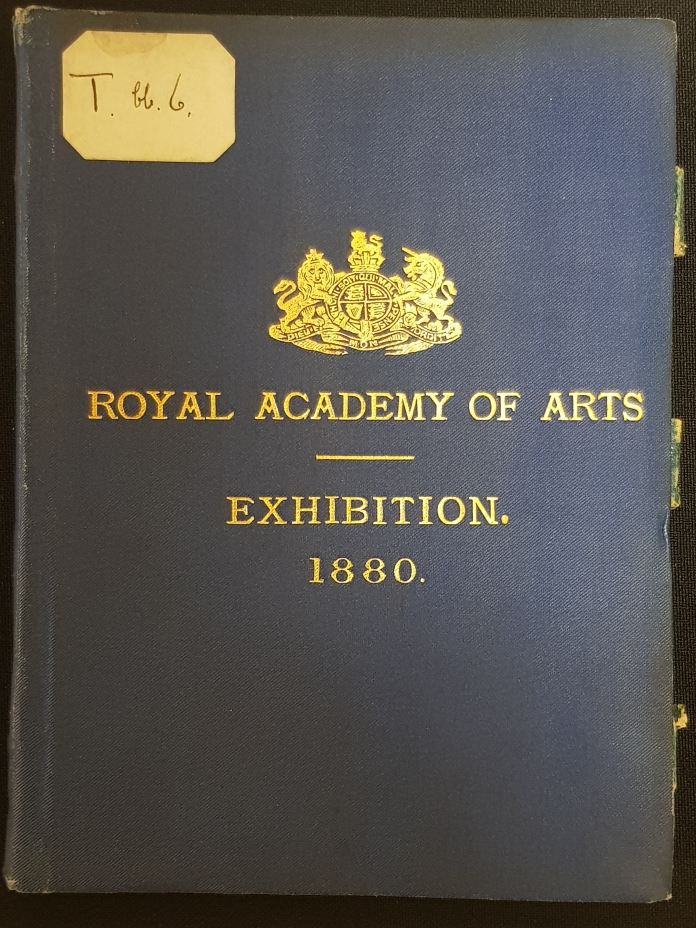 But at least it had a plan of the galleries, with a SCULPTURE GALLERY (the current Gallery 6) and a LECTURE ROOM next to the OCTAGON, as well as a route out of Gallery 2 into a REFRESHMENT ROOM:- 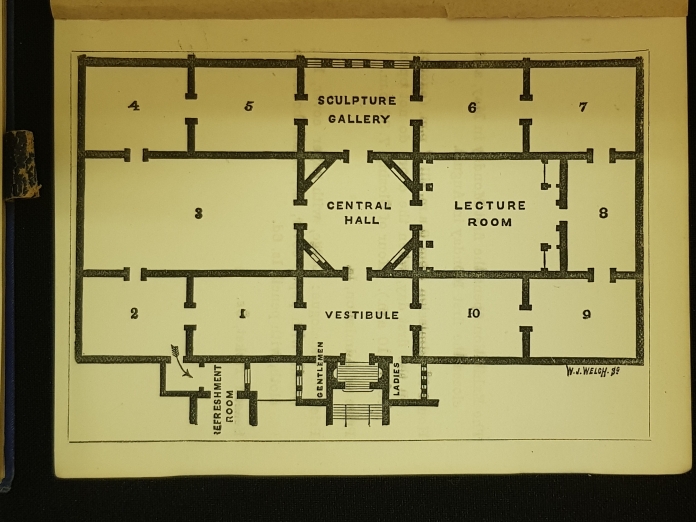 By 1957, it had shrunk further (was this to save on printing costs or was people’s eyesight better ?):- 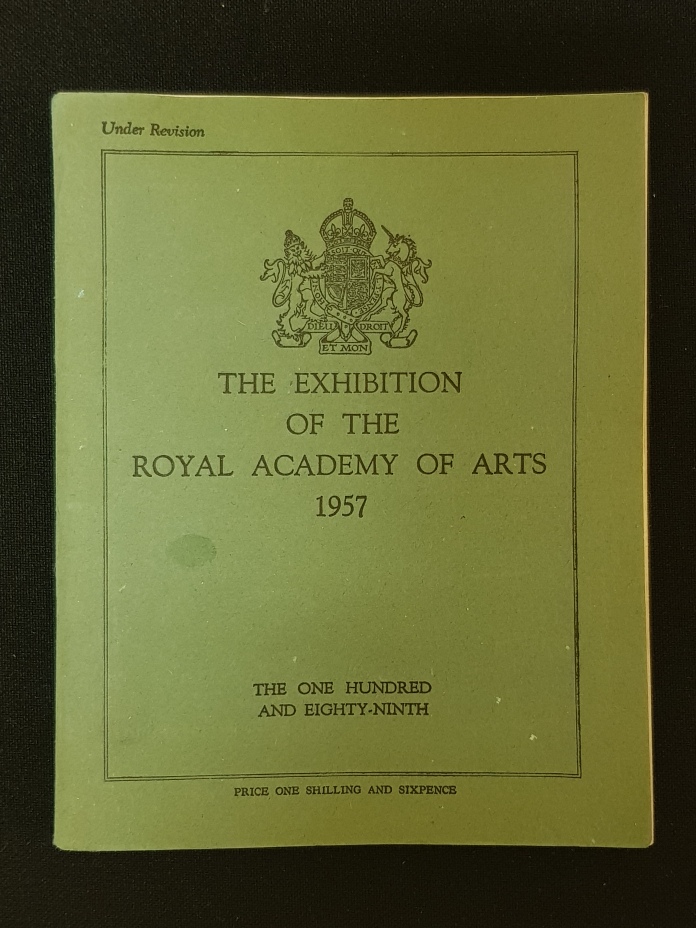 Then there is a curiosity.   In 1815, someone printed a catalogue of The Rejected Pictures…by a distinguished member of the hanging committee:- 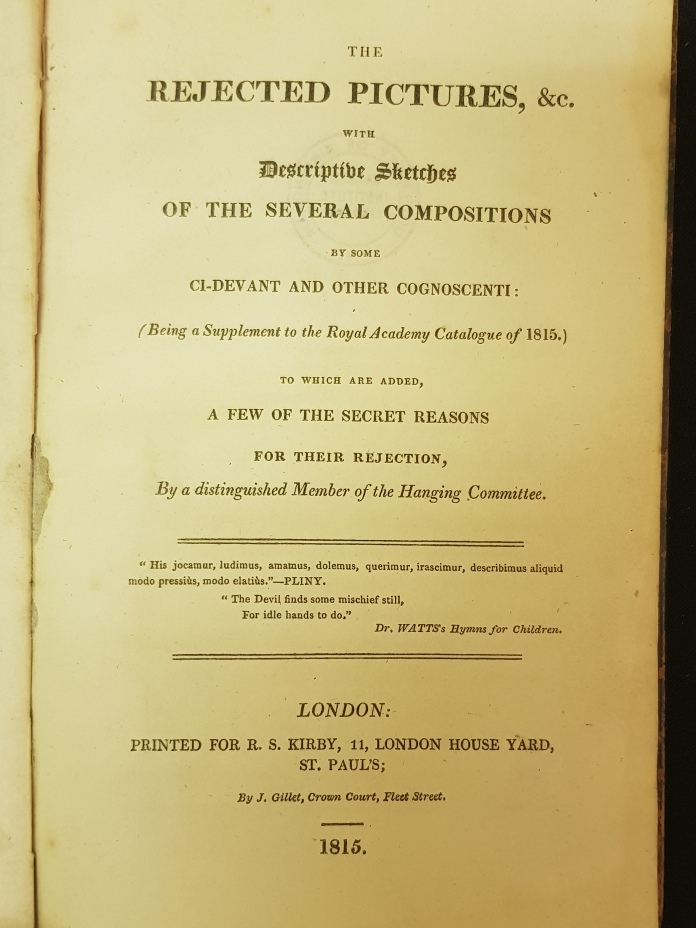 I was asked to give a lecture at the Barber Institute who have mounted a small, but choice display about Joshua Reynolds and his collection to celebrate the RA’s 250th. anniversary.   Most people think of Reynolds only as a fashionable portrait painter, but he was also a passionate student of the history of art, hauntimg the auction rooms and buying work not least to strip them down and find out how they were painted.   There’s a drawing attributed to Tintoretto with his collector’s mark clearly visible:- 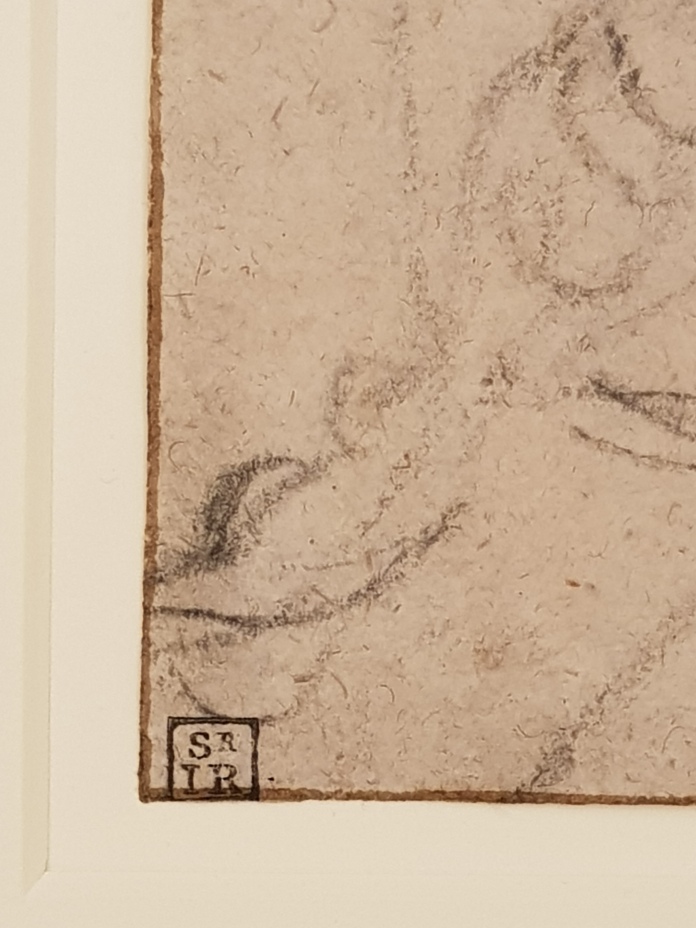 Next door is a painting which Reynolds thought (most likely, wrongly) was by Rubens of his second wife, Hélène Fourment (also wrongly).

Then an early work, when he was a jobbing artist in Devonport:- 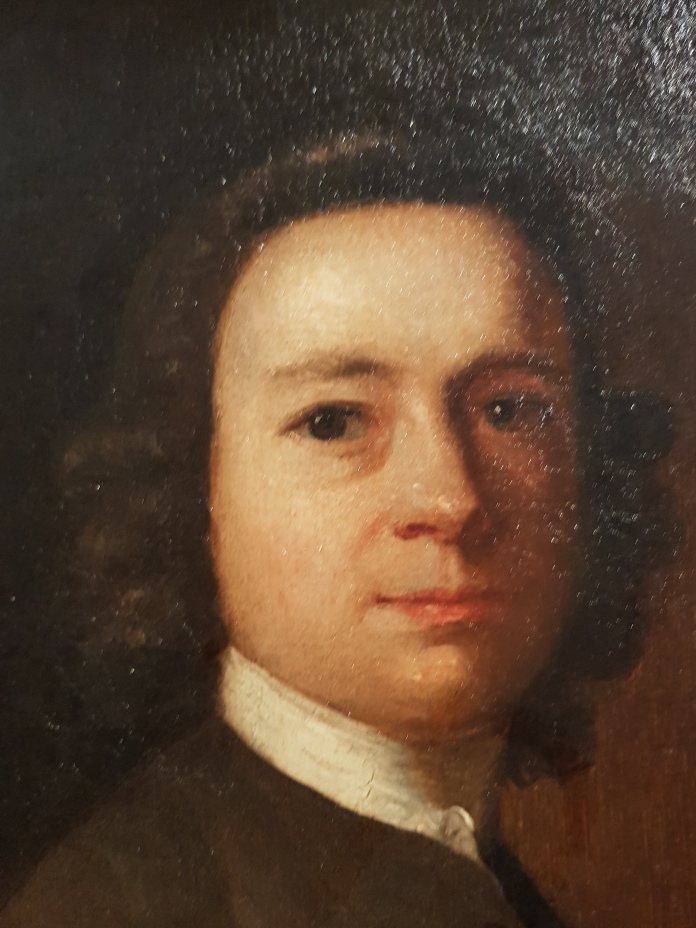 The Rev. William Beele, also from the late 1749s, when he went to Italy (what a vast improvement):- 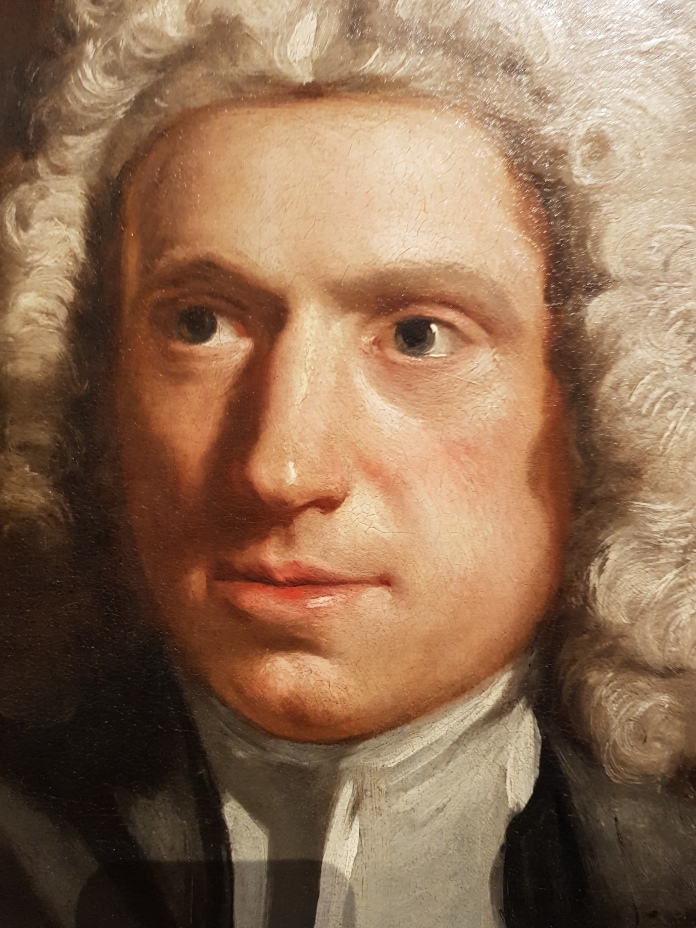 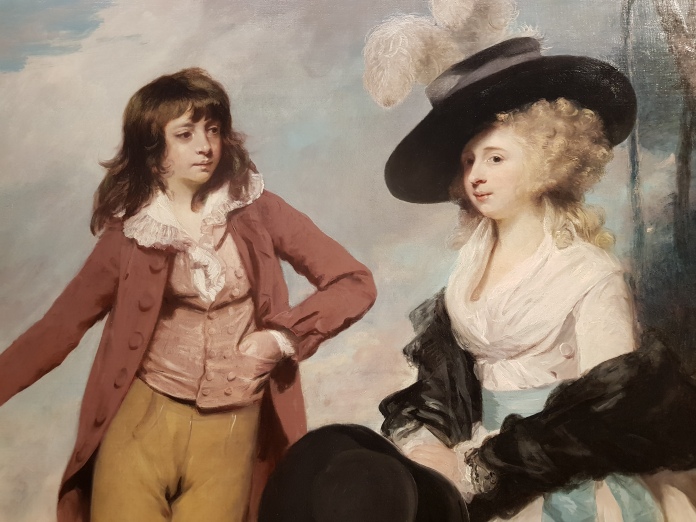 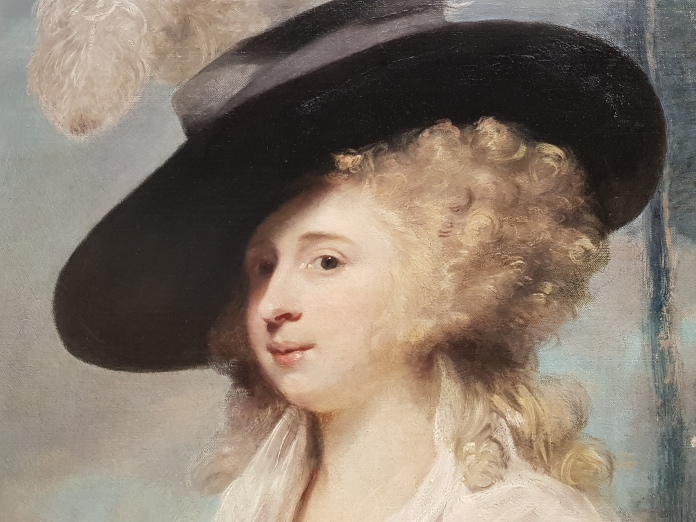 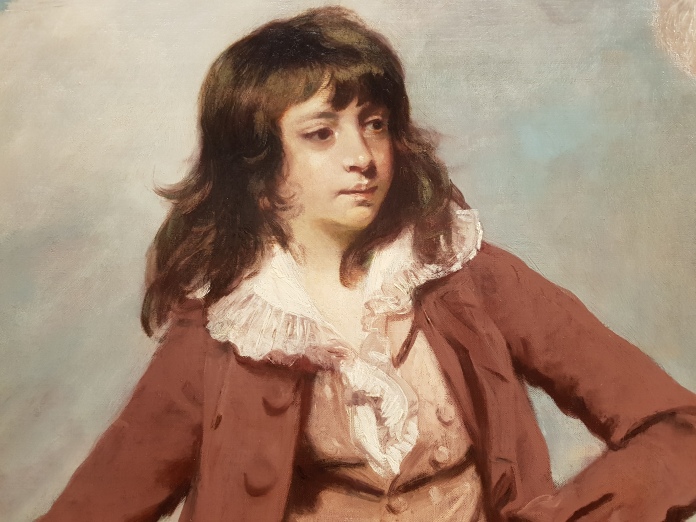 Then it was closing time.