For anyone seeking an extremely esoteric Christmas present, I have contributed a long (possibly too long) essay on the eighteenth-century history of Samuel Johnson’s Literary Club (aka The Turk’s Head Club) to a volume of essays which is being privately published on December 10th. under the title New Annals of the Club (there was a predecessor volume published in 1914 called Annals of the Club).   The other authors are David Cannadine and Peter Hennessy.   It’s available only from Sotheran’s bookshop in Sackville Street and can be pre-ordered through books@sotherans.co.uk.   Price is £100.

I stumbled in to the old Midland Bank building on Piccadilly and discovered that it has been converted into a smart and chic luxury bar and bookshop, where one can take shelter from the hubbub of Piccadilly, get a book bound, buy an African sculpture and have a madeleine.   The building was designed by Lutyens, opened in 1925, was briefly a branch of Hauser and Wirth (they held a wonderful exhibition by Phyllida Barlow) and it still retains much of its original character:

END_OF_DOCUMENT_TOKEN_TO_BE_REPLACED

I have been thinking about Piccadilly Arcade, trying to remember Ian Nairn’s description of it:  ‘It is one of those weird places which has one element to a much bigger scale than anything else.   Here it is the curved glass windows…They ripple down the slope from Piccadilly like the sides of a Greek temple all done in glass’.   I walk up it most mornings and like and admire its sweep and swagger from Budd in the north to New & Lingwood guarding the gates to Jermyn Street: 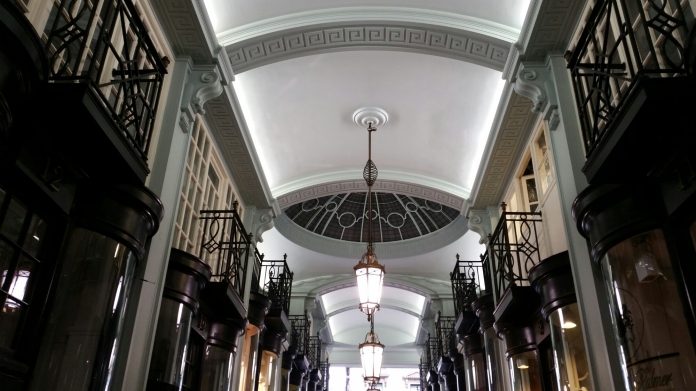 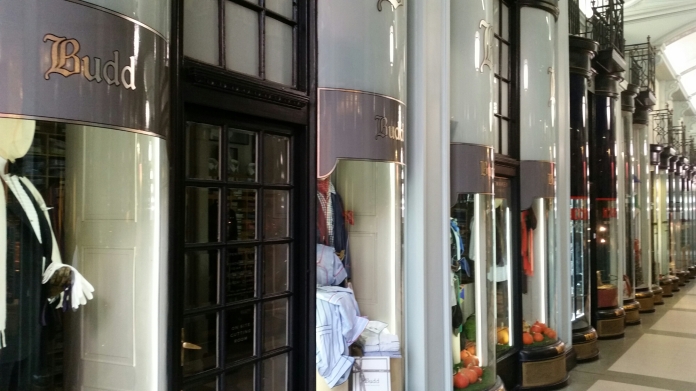 I have just been to Gillian Naylor’s memorial event in the Lecture Theatre of the RCA in which her former students and friends reminisced about her influence.   Her first book was on the Bauhaus, published in 1968 to coincide with an exhibition at the Royal Academy.   Why, I wondered, was the Royal Academy, then universally regarded as a bastion of traditionalism, celebrating its bicentenary with an exhibition on the Bauhaus ?  Most people remembered Gillian, as do I, most vividly on foreign study trips:  1986 and 1987 to Prague, to the Museum of Applied Arts with Milena Lamarová;  1988 to East Berlin with Jeremy Aynsley;  1989 to Stockholm (at least that’s my memory).   Gillian looked seraphic surrounded by monuments of national romanticism.

On the day of a memorial event at the Royal College of Art to commemorate – and celebrate – the life of the late Gillian Naylor, a former Senior Tutor in the Department of Cultural History, I am posting an edited version of what I said about her at her funeral in Brighton, because, rather shamefully, none of the national newspapers have published a full obituary of her (for those of you who like short posts, this does not qualify):-

I got to know Gillian Naylor (or Gill as I think I never quite dared to call her) when I was appointed as an Assistant Keeper in the Education Department of the Victoria and Albert Museum in October 1982 to act as her shadow in the organisation and running of the joint V&A/Royal College of Art Course in the History of Design. The first cohort of students had already been accepted and, indeed, had already arrived in the set of rooms which had been allocated to them off the so-called British primary galleries. Gillian had been recruited a couple of years or so previously as Senior Tutor in the Department of Cultural History at the Royal College of Art, moving there from Kingston Polytechnic. I always felt she thought that I had drawn the long straw, because my job only entailed overseeing the joint course, whereas hers and Penny Sparke’s also involved a great deal of teaching of students in the applied arts departments of the Royal College. Gillian always had a slightly careworn air: hardworking, deeply conscientious, infinitely patient, always available to talk to students, counsel them either on their work or on other aspects of their lives. We all knew that there was a tragedy in the background of her life, without quite knowing what it was, and it was only much later that I learned – not from her – of the death of her only son, Tom, from drowning when he was seventeen. END_OF_DOCUMENT_TOKEN_TO_BE_REPLACED

At the weekend I walked past Bancroft Road Public Library where a long time ago I used to do research on local history.   It’s a fine building, designed in the 1860s as a Vestry Hall and converted into a public library with the help of funding from Carnegie.   But it’s now looking run down and, like all the libraries in Tower Hamlets, has been at risk of sale (our old library in Limehouse has been sold as a restaurant).   Let’s hope it survives:

END_OF_DOCUMENT_TOKEN_TO_BE_REPLACED

I spent the evening at the prize giving for the Young Masters art prize, which was established some years ago by the Cynthia Corbett Gallery and shows work at Lloyds Club in the City and Sphinx Fine Art in Kensington Church Street.   It was an impressively international gathering.   The first prize went to Juergen Wolf, a German artist and former Catholic priest.   The equal second prizes went to Saskia Boelsums, a Dutch artist, for delicate and intense still lives, and to Marwane Pallas, a French artist, for works of photographic violence.   All were influenced (but not dominated) by Old Master painting. 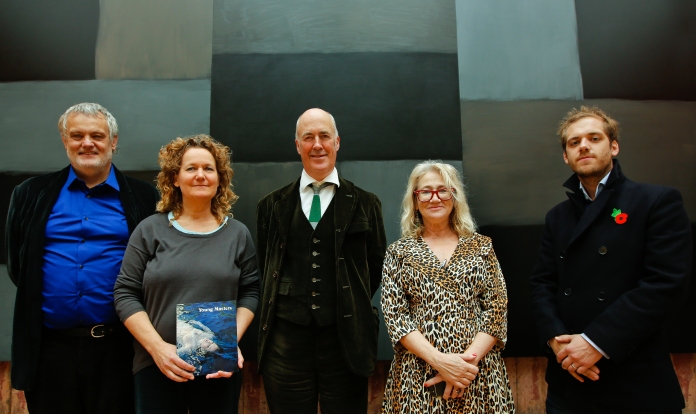 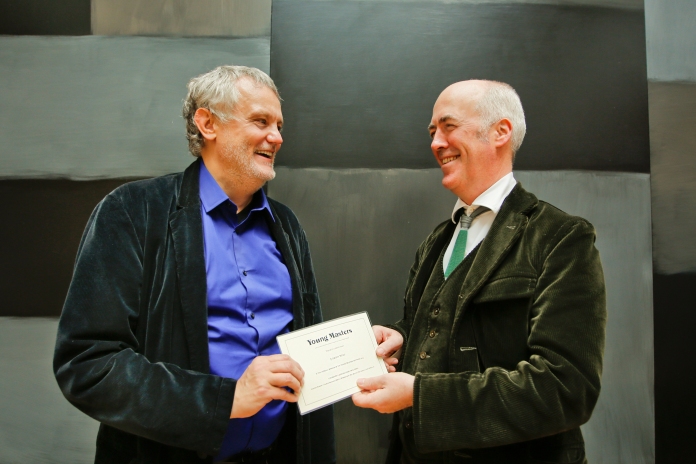 I went to see the V&A’s Constable exhibition.   Its premise is that he was not so much a naturalistic painter, as he has traditionally been regarded, but more someone who based his practice on the close study and imitation of old master paintings.   It is certainly true that he was deeply influenced by George Beaumont, the painter and landed gentleman whose collection formed the basis of the National Gallery (and who incidentally gave the Michelangelo Tondo to the Royal Academy).   At the Royal Academy Schools, he would have been encouraged to study old master prints in the library and he also collected prints voraciously.   But he also reacted to these disciplines by undertaking what he described as ‘pure and unaffected representations from nature’.   If some of his skills were learned by copying, as is very clearly demonstrated by the exhibition, this doesn’t negate the incredible freshness of his observations from nature, his drawings of clouds and watercolours of Old Sarum.

I learn something every day about our Anselm Kiefer exhibition.   I particularly learn something when taken round by Tim Marlow, our Director of Artistic Programmes, who knows so much about Kiefer from many years working with him at White Cube.   He mentioned two key literary sources for Kiefer’s mythographic ideas.   One is the writings of Robert Fludd, the early seventeenth-century Rosicrucian and cosmologist, who believed in a close connection between plants and the stars.   The second is the poetry of Paul Celan, the Romanian-born, German-speaking Jewish poet and translator who settled in Paris after the war and whose best known work is Todesfuge.

I have only just heard the sad news of the death of Sir Ronald Grierson, Ronnie as he was always known, although I have only just learned that this was not his original name, but was born Rolf Griessmann in Bamberg and only changed his name after the war with the help of a telephone directory.   He was an active Trustee of the Royal Academy to the end, missing the last meeting only because he went to the wrong building.   A formidable international networker, I never knew if he would be in Sweden, Liechtenstein or Beijing.   I once made the mistake of boasting that I couldn’t meet him because I was was spending the weekend at a conference in Hong Kong.   He mentioned that he was thinking of coming too on his way back from Beijing.   He did.   We travelled back together, the only difference being that he had a specially designated member of staff to escort him on to the aircraft and always had the front seat, on British Airways as in the rest of life.