I have been pleased to go back to David Chipperfield’s Hepworth Wakefield which I have barely visited since it first opened in 2010.   The competition for the selection of an architect was held in 2003 under the auspices of John Foster, Wakefield’s energetic then Chief Executive.   Ed Jones and I put Kengo Kuma on the shortlist as a result of seeing images of his Bato Hiroshige Museum north of Tokyo, which had recently been completed, but he arrived for the presentation exhausted from an overnight flight from Tokyo and the train trip to Wakefield.   Zaha Hadid did a presentation flanked by assistants who all looked as if they had arrived from Mars.   David presented last and the scheme as shown in pencil sketches was pretty much as built:  a set of geometric building blocks (‘a conglomerate of diverse irregular forms’), playing with irregular geometries, built out of pigmented in situ concrete, and focussed on bringing the highest quality of daylight into the large-scale, irregularly shaped, internal galleries.   It has turned out to be one of the best and most serious, if taciturn, buildings in the country:- 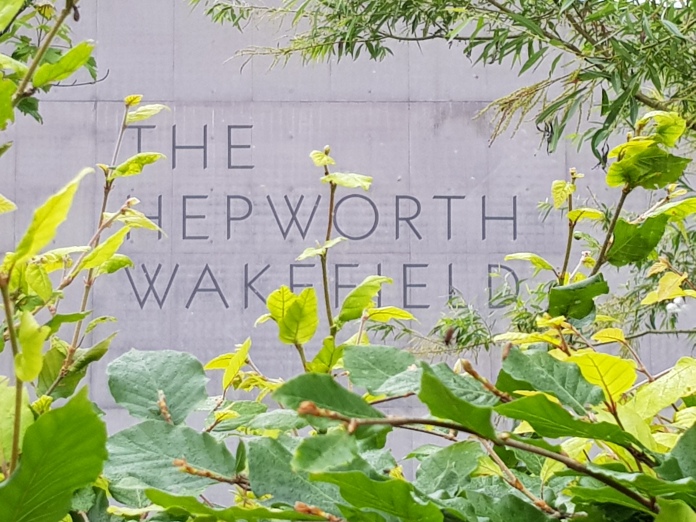 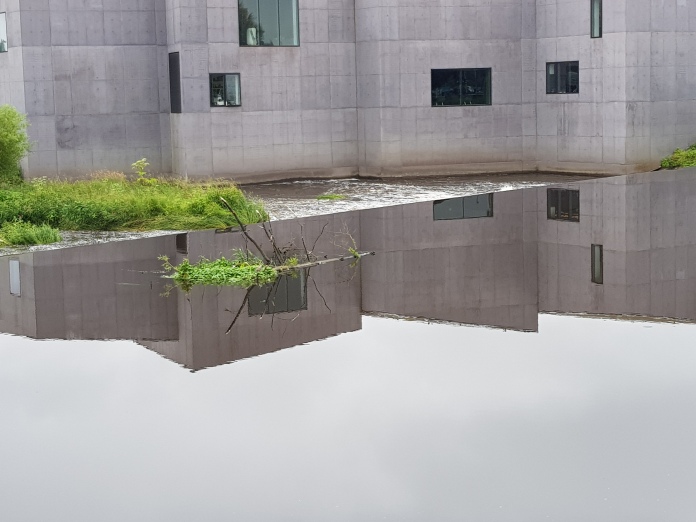 It’s a good year for Howard Hodgkin exhibitions, wiyh Absent Friends at the NPG and now Painting India at the Hepworth Wakefield, showing his long obsession with Indian painting, first inspired by Wilfrid Blunt, his art master at Eton (Anthony’s older brother), and with India itself, which he visited every year from 1964.   The paintings were selected by Hodgkin himself, and show the increasing freedom of the way he handled paint. 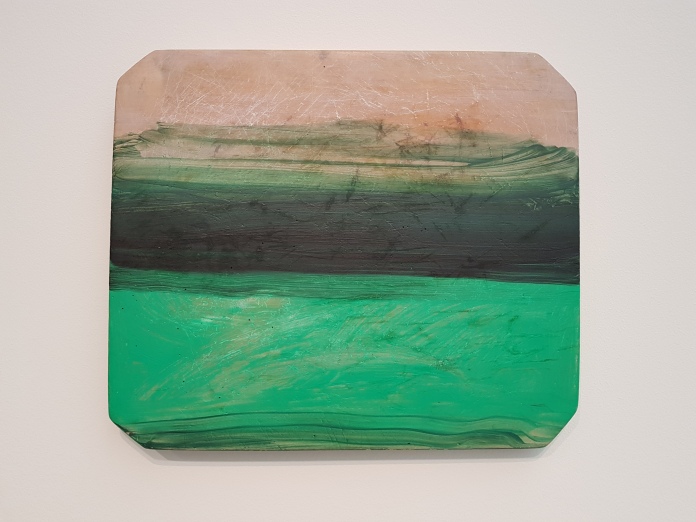 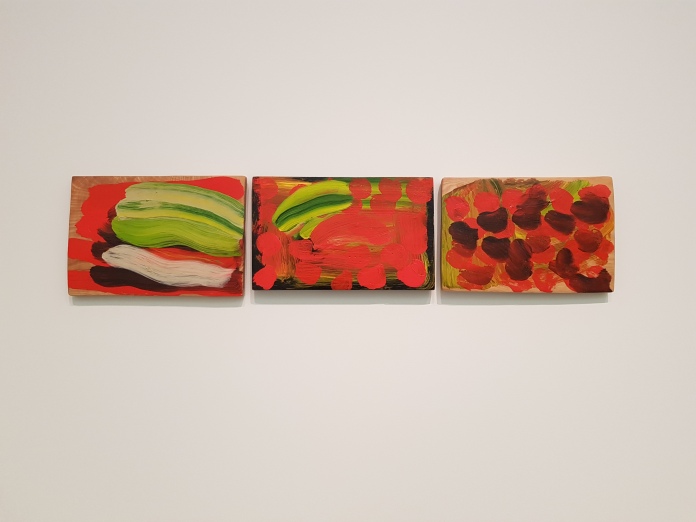 I had a meeting with thin-cut cucumber sandwiches in Chesil Court, which was built in 1938, just before the second world war, for the electricity workers who serviced the electricity station next door.   There was a fine internal courtyard:-

It had beautiful 1930s lettering indicating which floor the flat might be:- 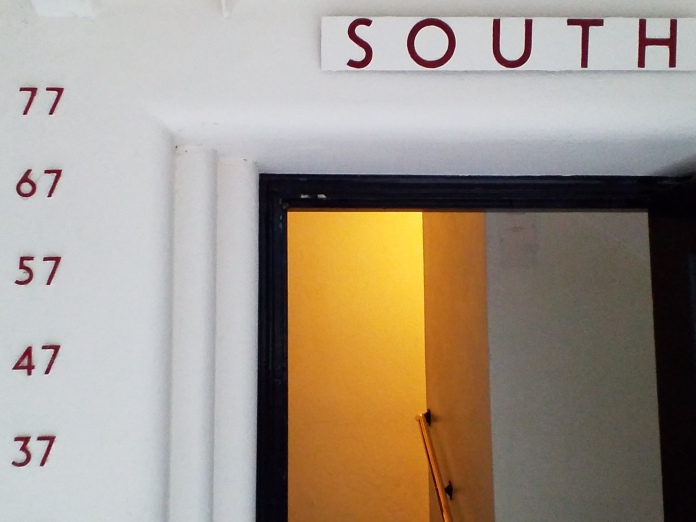 Upstairs, there was a view out over the back of Cheyne Walk towards the pylons of Albert Bridge and Norman Foster’s offices in Battersea, all the way to the Crystal Palace on the hills beyond:-

I had been told that all art historians are envious of David Ekserdjian’s private library and I certainly was: towering shelves supplied by Vitsoe from floor to ceiling in an annexe by the kitchen, photographed to better and more dramatic effect as part of the award’s ceremony last night:- 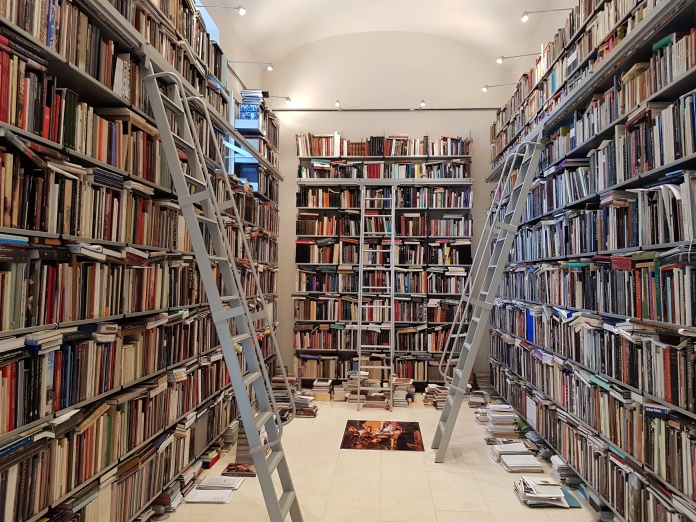 I went to Leicester last night to celebrate the fact that the Royal Academy’s exhibition on Bronze, now some time ago (it took place in autumn 2012), had been shortlisted for a so-called Research Impact award in which it was pitted against two other socially improving public projects, in which academics at the university had been prominently involved.   Bronze didn’t win, but it reminded me of the tour de force whereby David Ekserdjian pulled together an astonishing assembly of bronze artefacts from all over the world at very short notice because our planned exhibition on Syria had had to be cancelled owing to the so-called Arab spring.   I was glad that his public achievement was recognised.

At lunchtime today, we were trying to remember the name of the architect for the Shakespeare Memorial Theatre, important as the work of a female architect, Elisabeth Scott.   She was a great-neice of Gilbert Scott and an early student at the AA;  won the competition in 1928 (for some reason I remembered the date correctly) in conjunction with Alison Sleigh, a fellow student at the AA, after working for Louis de Soissons and Oliver Hill.   I haven’t seen the theatre for a long time, but remember it as grandly civic as a design, slightly Scandinavian in character, with a good relationship to the Avon, and was pleased that it escaped the proposal to demolish it not so long ago.

I had never seen the remains of the old Victorian kitchen garden at Blackheath:- 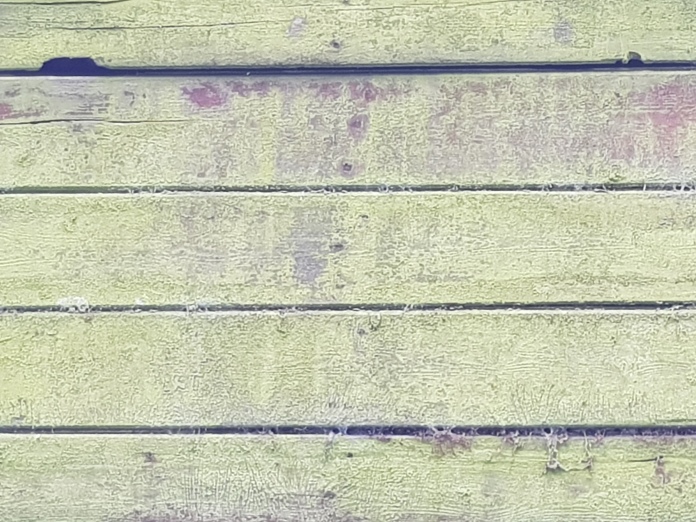 The entrance to one of the Victorian lodges:-

An old garage (not Victorian):-

And the metal fencing:- 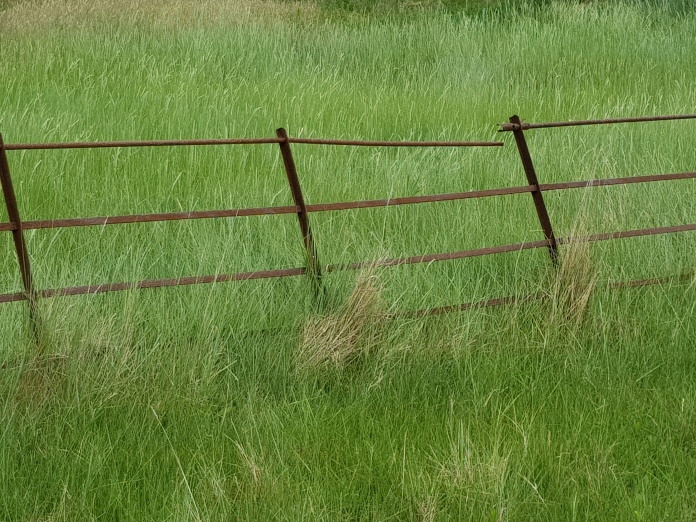 Mark Padmore sang – beautifully – on Saturday morning in Aldeburgh church:  Schumann’s Eichendorff Liederkreis, melancholy and romantic, followed after the interval by Fauré’s La Bonne Chanson, based on poems written by Verlaine, when he fell in love (but he was homosexual) with the 14-year old half-sister of Charles de Silvry, and ending with folk songs set to music by Benjamin Britten.   Not a bad way to spend a Saturday morning.

We stopped in Woodbridge on the way to Aldeburgh.   It’s an unexpectedly well-preserved English rural town, not too tarted up, full of independent shops and atmospheric detailing.

We walked down the so-called Thoroughfare, past a coffee shop with mid-seventeenth-century wood carving:- 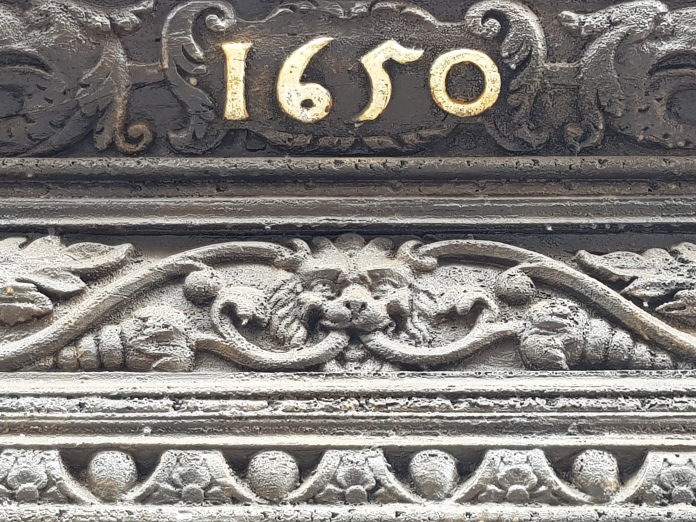 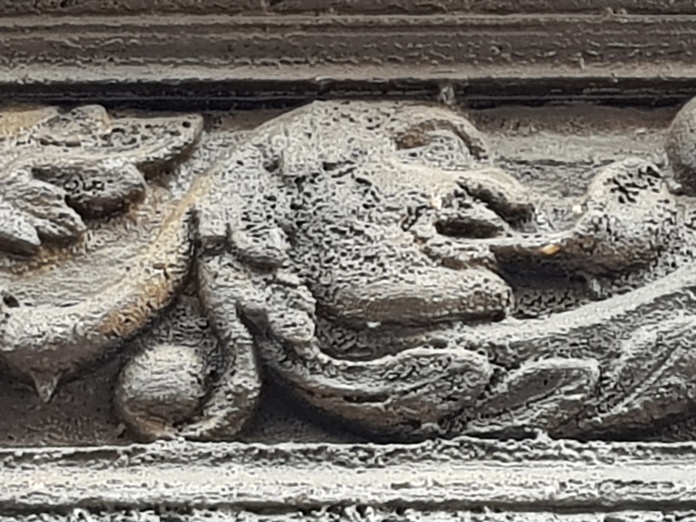 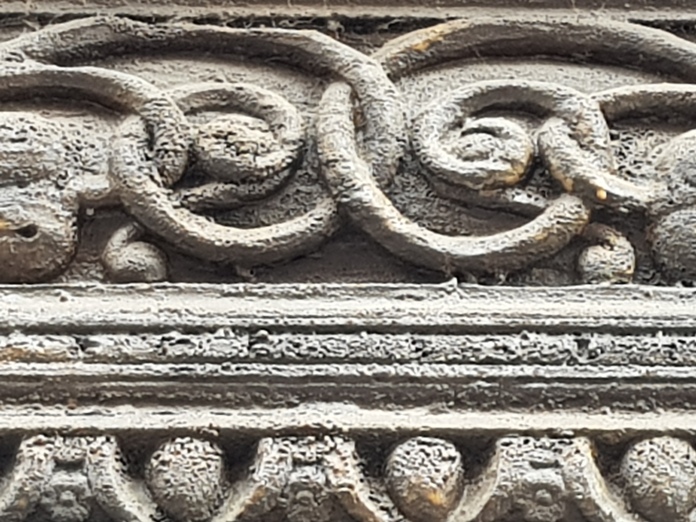 Then past T.W. Cotman’s branch of Lloyd’s Bank, which tells you what it is, as if this wasn’t obvious:-

Up Church Street with the premises of Webb Bros., an old- fashioned ironmongers:-

And into the churchyard of St. Mary, where one is confronted by a neoclassical urn commemorating James Pulham, friend of Constable, who died MAY THE SECOND 1830:-

Opposite, the tomb of the Clarkes:- 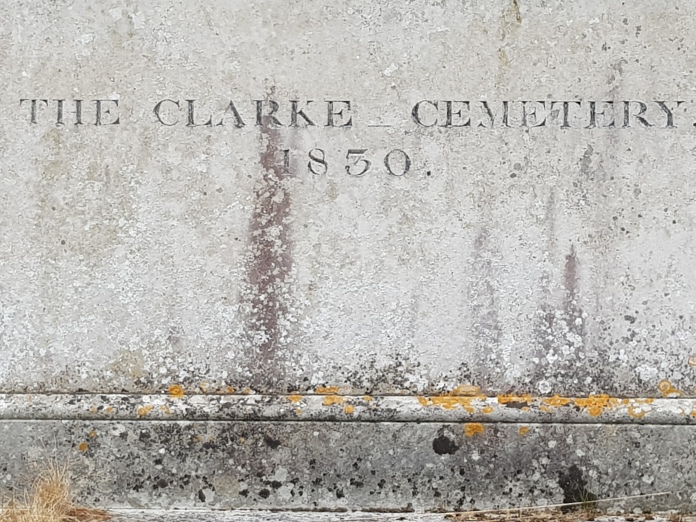 The church itself is very impressive – large and civic and with decorative flint detailing:- 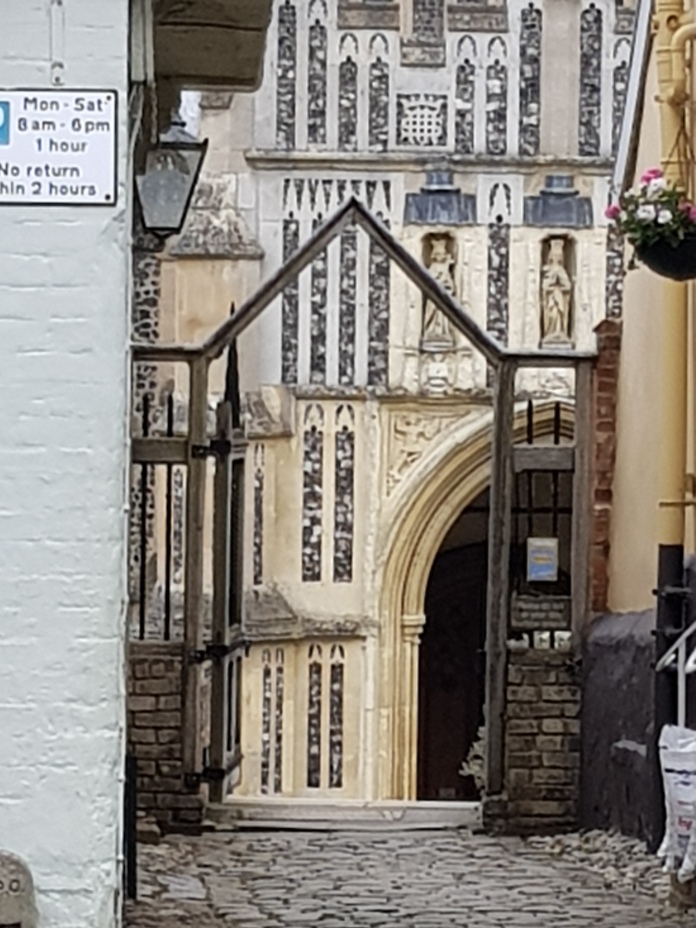 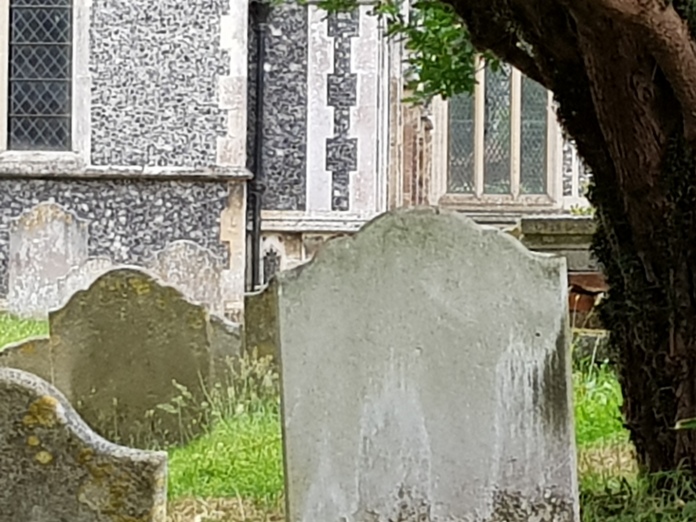 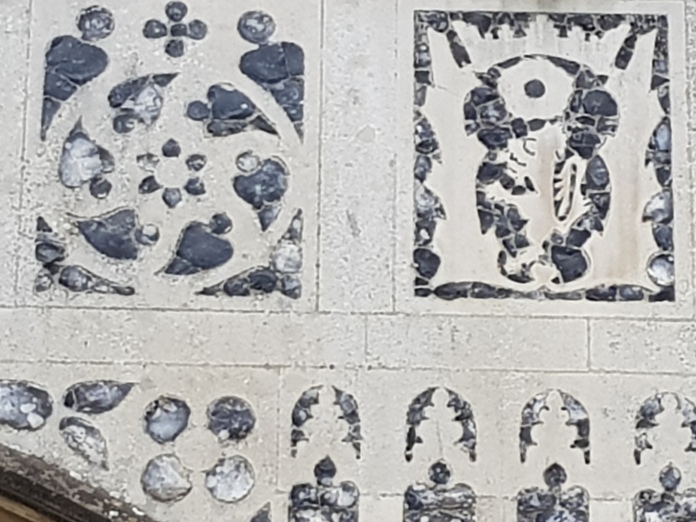 Inside, there is a fine early seventeenth-century tomb commemorating Jeffrey Pitman, kneeling above his wives and sons.   These are the sons:- 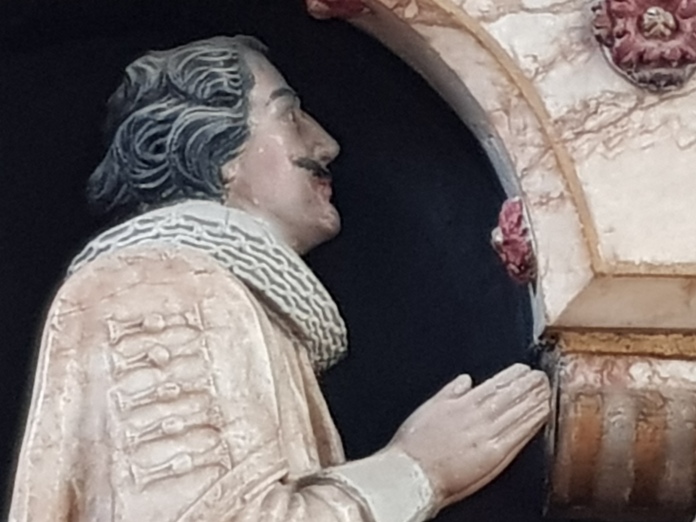 I liked the font:- 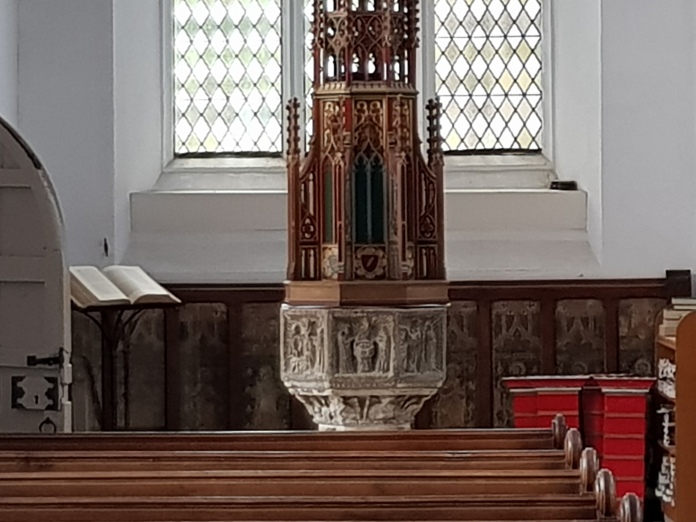 And a corrugated iron, water butt:- 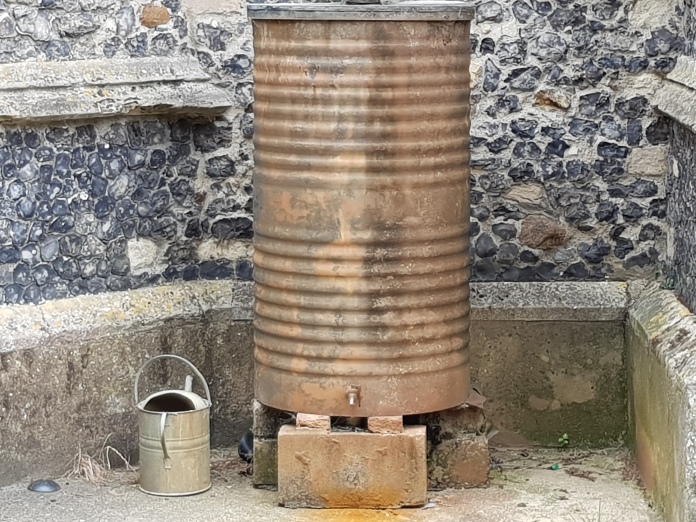 Up on Market Hill, I admired an antique shop of a sort one now seldom sees:- 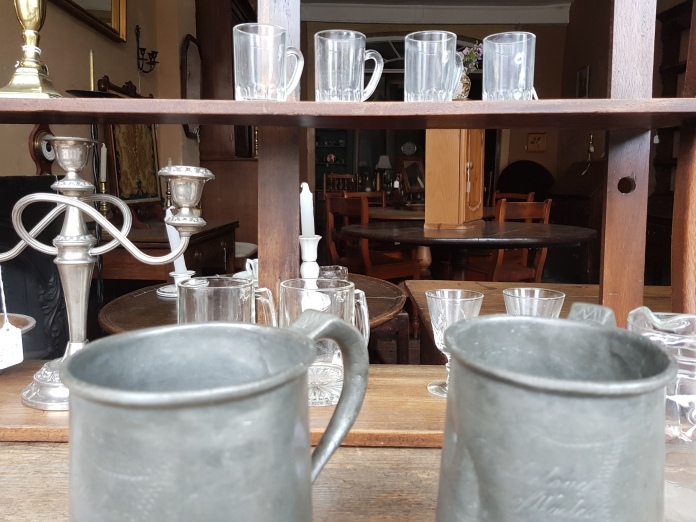 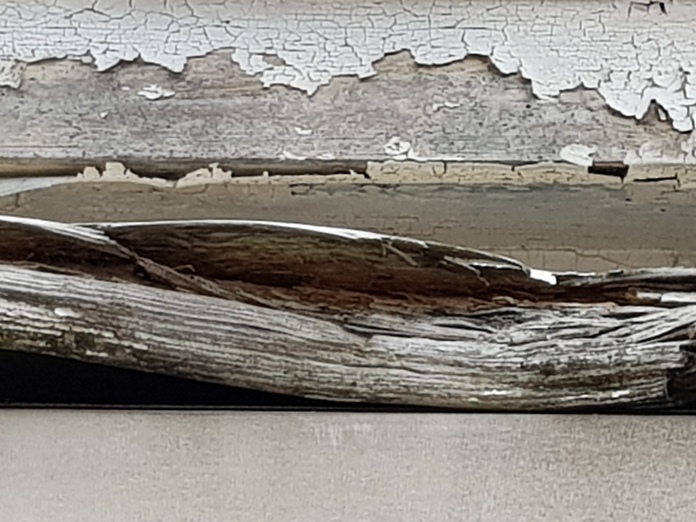 And the decorative lettering in the window of a private house:-

All of it nicely intact, protected by acres of car parking which keeps the cars away.

I started the day with a cup of coffee in this year’s Serpentine Pavilion – a lightweight and satisfyingly patterned structure designed to catch and channel water and the work of Francis Kéré, an architect from Gando in Burkina Faso, but who studied in the Technical University in Berlin and is now based there:- 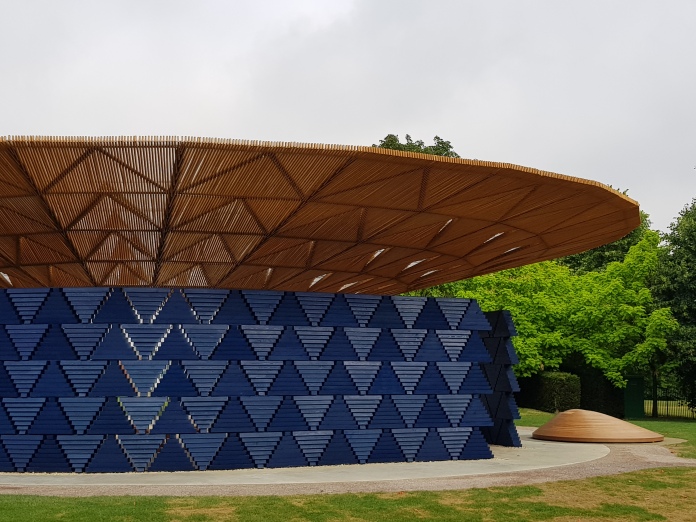