We were able to pay our respects to the great cavalcade of buildings in the Grand Place which were built by the Guilds after a fire in 1695:-

END_OF_DOCUMENT_TOKEN_TO_BE_REPLACED

It was cold in the morning and we had no time to do anything much more than have breakfast in Mokafé in the wonderful Galeries Saint Hubert:-

END_OF_DOCUMENT_TOKEN_TO_BE_REPLACED

We made a lightning dash to Brussels to attend the first night of Pierre Audi’s production of Alcina, designed by Patrick Kinmonth.   First performed some time ago in Drottningholm, revived in Amsterdam, and now renewed for La Monnaie, it has been designed and staged much more authentically than would now be normal in London, with a fine eye for eighteenth-century detail, based on the paintings of Devis (and maybe a bit of David).   The second act, in particular, was extraordinarily powerful:  beautiful music, beautifully staged and, above all, beautifully sung by Sandrine Piau as Alcina.

END_OF_DOCUMENT_TOKEN_TO_BE_REPLACED

I have managed to verify that James Lomax-Simpson was, indeed, the designer of Unilever House.   His daughter confirmed last night that her grandfather, an architect in Bolton, had made friends with the original Lord Leverhulme who was godfather to her father.   Born in 1882, Lomax-Simpson trained as an architect in Liverpool, worked for the Wolverhampton Corrugated Iron Company, before becoming Head of the Architect’s Department of Lever Brothers in 1910 and joining the Board as a partner in 1917.   He was responsible for much of the design of Port Sunlight as well as a castle for Lord Leverhulme in Stornaway.   So, it was natural that he would do the design of the company’s grand new headquarters on the Embankment, while leaving it to Burnet, Tait and Partners to execute it.

I have been doing background research on Unilever House where the majority of the staff of the RA (including me) are migrating when building work starts on Burlington Gardens later this year.   It’s an impressive building which I’ve only visited once before when it was the headquarters of the Leverhulme Trust.   Situated at the prow of Blackfriars Bridge, it was designed by James Lomax-Simpson, a member of the Lever Brothers Board, under the auspices of Sir John Burnet and Thomas Tait.   The drawings were exhibited in the Summer Exhibition.   Work began in 1929, the year of the Crash and flanking sculptures of horses (Controlled Energy) were added by Sir William Dick Reid, an ex-soldier and prolific designer of war memorials, who was elected an RA in 1928.   The lift cars were designed by Eric Gill.   The whole building was hollowed out between October 2004 and March 2007 by Kohn Pedersen Fox to create decks of offices overlooking a central atrium.   I like it (luckily):  grand, central, furnished by Vitra and half an hour’s brisk walk from the RA. 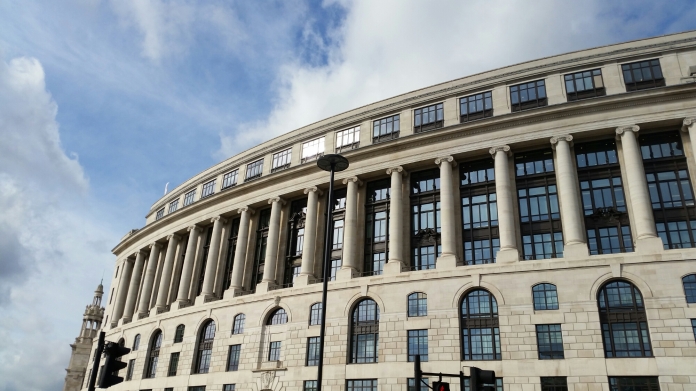 END_OF_DOCUMENT_TOKEN_TO_BE_REPLACED

I have just been to an event at which Allen Jones was encouraged – and expected – to talk about sex in art, his own and Rubens.   He played the discussion with a completely straight bat, and it was hard for him to be drawn.   The most memorable part was irrelevant to sex, in which he compared the understanding of painting to the appreciation of skills in tap dancing:  you need a culture of skills to enable the painting of fur in Rubens.

I went to an event last night organised by Debrett’s, which was established in 1769, the year after the Royal Academy, to help police the upper echelons of English society through the publication of The New Peerage.   Its chief executive gave a fine speech in which she denounced the tendency for people of so-called influence to be privately educated, which was an intriguing inversion of its original role, nowadays committed to the establishment of a free – but networking – meritocracy.

We arrived early for lunch in Flood Street, so explored the local neighbourhood:  Oakley Gardens, the home of George Gissing, and Phene Street, which is spelt on the street sign Phené after the local developer, Dr. J.S. Phené, a now forgotten archaeologist, collector, poet and recluse, who wrote about symbolism in literature, whose house at 32, Oakley Street was covered by shields and flags, and was a passionate advocate of trees:

END_OF_DOCUMENT_TOKEN_TO_BE_REPLACED

We went to Monteverdi’s Orfeo at the Roundhouse last night.   I realised how shamefully ignorant I am of Monteverdi’s music, so much earlier than the majority of the classical repertory, hovering between the sacred and the secular, the sacramental and theatre, working in Mantua, then Venice, and writing Orfeo in 1607, before Shakespeare’s Tempest, for the Carnival in Mantua.   There was a huge audience for it.   It was intense, highly dramatic, Orfeo ending up dangling from a trapeze, and brilliantly performed.

I had arranged to come out early to Strawberry Hill, Horace Walpole’s suburban retreat by the Thames in Twickenham, which he bought in 1747 from Mrs. Chenevix, the toy seller, and gradually added to and gothicised during the course of his life with the help of his friend, John Chute, whom he had met on the Grand Tour.   The building history is immensely complicated, beginning with a small house of the 1690s which was redecorated, stained glass inserted in the windows and flock wallpaper by Thomas Bromwich, some of which survives in a cupboard.   In 1753, a grand gothic library was added, based on Chute’s drawings of Old St. Paul’s, together with a gothic staircase, designed by Richard Bentley, son of the classical scholar.   Then, Walpole’s ideas got grander and he added a gallery, based on Henry VII’s chapel in Westminster Abbey, and the Tribune, which was his cabinet of curiosities.   It’s a fascinating combination of collecting, antiquarianism and slightly more playful ancestor worship.

This is the exterior:-