I had a conversation during the week about Bill Brandt, who is to be the subject of an exhibition at the Yale Center for British Art.   I had thought, quite wrongly, that he had contributed photographs to Robert Byron’s Shell Guide to Wiltshire, with its surreal collage cover done by Lord Berners.   What he did do was provide photographs for the National Buildings Record, established by Walter Godfrey in 1940 ‘to meet the dangers of war then threatening many buildings of national importance’ and with John Summerson, who had a good eye for architectural photography, as its Deputy Director.   Brandt (his voice ‘as loud as a moth’) took unexpectedly straight documentary photographs for the NBR of the tombs in Canterbury Cathedral, as well as buildings, streets and churches in Chichester, Canterbury and Rochester.   At the same time, he took much more atmospheric photographs of ancient monuments towards the end of the war, including Stonehenge and Avebury, published first in Lilliput and in 1951 in his book on Literary Britain. 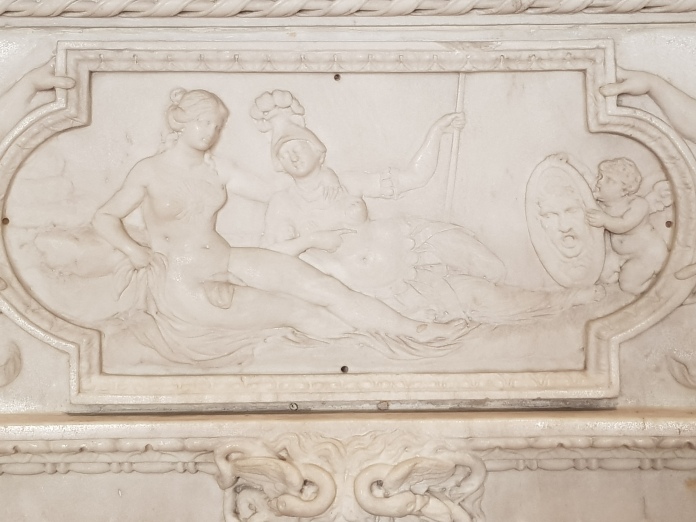 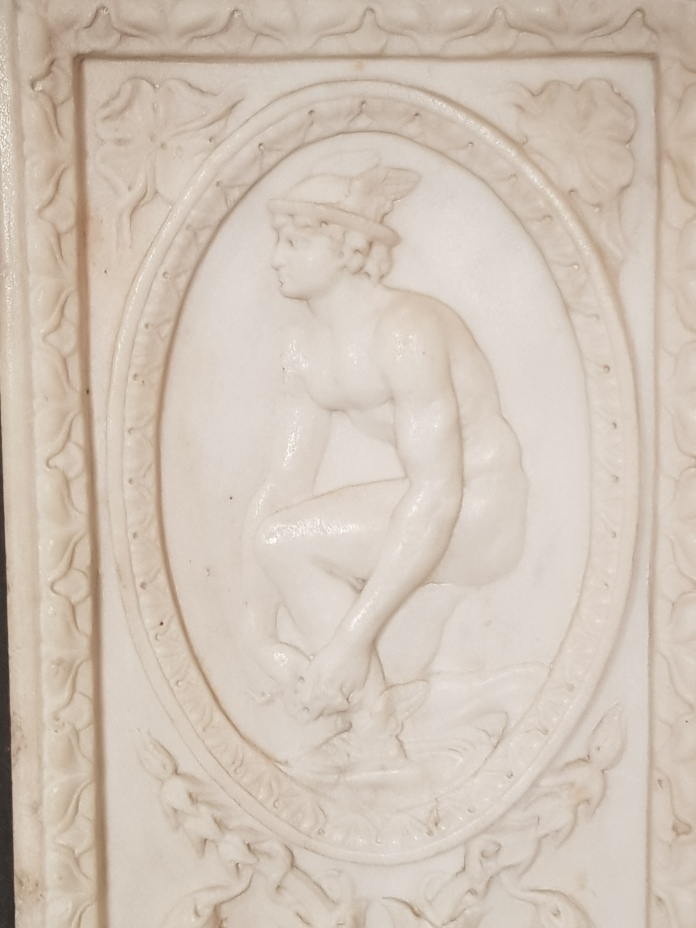 Wilton was an intriguing figure – well known and successful as a sculptor, trained in Flanders and Paris, knowledgeable about antiquities, and one of the four key figures in the foundation of the Royal Academy, but, at the same time, running a successful yard, selling chimneypieces from Queen Anne Street East, opposite Marylebone Fields, sellings casts, urns and vases by the yard.

While at it, I tried to identify the layout of the rooms occupied by the Royal Academy. 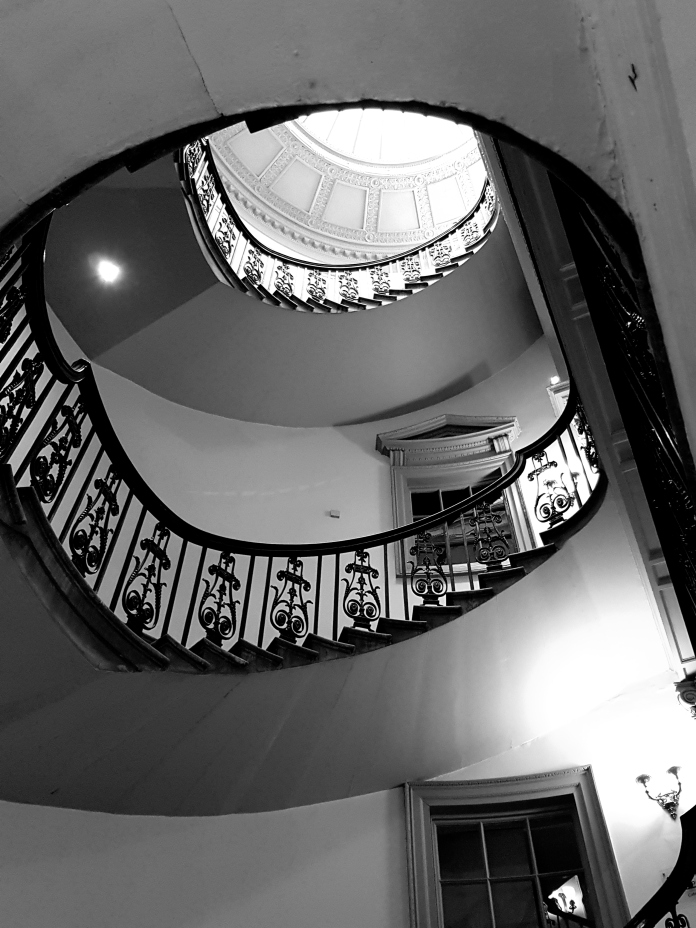 The first room on the first floor opening out onto the staircase was the Ante Room and Library, with surprisingly elegant plasterwork decoration and Theory by Reynolds in the middle of the ceiling:-

The room next door over the arch was the meeting room, described as for the Royal Society, with chimneypieces by Joseph Wilton:-

To the left was a room for casts with the original insignia of the RA in the plasterwork decoration:-

Beyond, in the centre of the Strand façade, the original Council and General Assembly Room, a good space, again with chimneypieces by Wilton:-

On the floor above was the Great Room, due to be restored as part of the plans by Witherford Watson Mann.

I saw bits of Somerset House I had never seen before.

The basement vaults next door to where Henrietta Maria had her chapel:-

The detailing, which, according to Baretti in his Guide through the Royal Academy, was ‘carved from finished drawings by Cipriani, one of the founding RAs:-

The bust of Newton over the entrance to the Royal Society:- 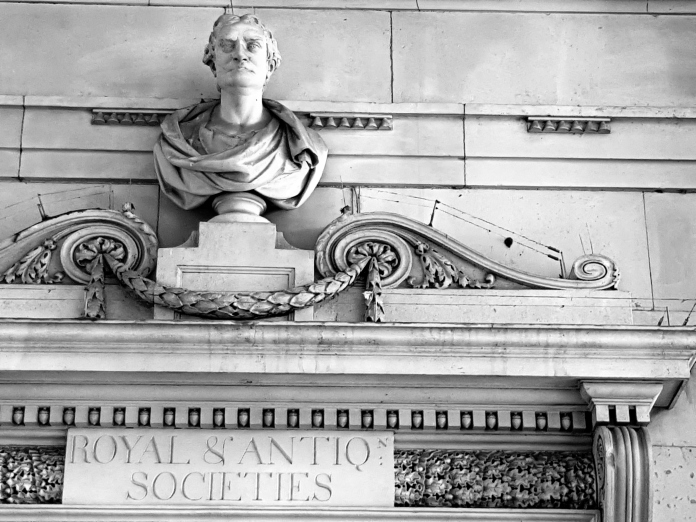 And, finally, the north front in the evening sun:-

We went to an event at the V&A to celebrate the Persian New Year.   It consisted of an ostensibly implausible, but increasingly persuasive comparison between the poetry of Robbie Burns and Khāja Shams-ud-Dīn Muhammed Hāfez-e Shīrāzī, known as Hafez, the fourteenth-century poet of Shiraz, whose poetry was accompanied by Santoor and tambourine.   The performance was by a Scottish group called Talking Sheep and ended with the audience singing – not very convincingly – Auld Lang Syne.

In the interests of the historical record, I feel that I should mention the fact that the Queen came to the Royal Academy today, dressed in brilliant orange (was it a protection against the winter cold ?): partly in order to see the pictures which she has so generously lent – and in such numbers – to our Charles I exhibition; and partly in order to see the nearly, but not quite completed building project in Burlington Gardens. There was more than a slight frisson observing her having a look at her ancestor who was so passionately knowledgeable about works of art, but also was executed. It is always said that her oldest son is extremely knowledgeable and admiring of his ancestor; but I wasn’t so absolutely confident that she was too.

I’m not sure whose idea it was to take a group photograph of all the RAs to celebrate its 250th. birthday. It wasn’t easily done. The photographer was Johnnie Shand Kydd, who came to fame as a photographer with his instamatic. I enjoyed watching him choreograph about eighty artists up the staircase in Burlington Gardens – not an easy task – all dressed up in their overcoats and hats to ward against the cold and look forward to the result, which will be effortlessly dominated by Frank Bowling RA who arrived wearing a solar topee.

We spent the cold weekend in a glut of watching television – four episodes of Civilisations to catch up with those who have already watched the whole series. I have been cautious of writing about it until I had had a chance of seeing more of the episodes. I was initially sceptical that the BBC had chosen three presenters, but, particularly now that I have seen one done by David Olusoga, I can see the point of it, as it does very effectively convey the different view points of post-colonialism: Schama who has incorporated the great monuments of the east as a counterpoint and enlargement of an essentially still European narrative, big on Michelangelo, Caravaggio and Velázquez, a sense of the heroic; Mary Beard who attempts to shift the narrative away from the makers towards the viewers and the way people look at works of art; and David Olusoga who analyses interestingly the way that European civilisation bulldozed its way disregardingly through other other people’s cultures. Occasionally, I dislike the curious soft focus which the cameramen use relentlessly and the unnecessary heroicisation of the presenter, particularly, oddly, the only female presenter. But, in general, I think it is an admirable and instructive re-writing, if not demolition, of Clark.

By an odd and happy coincidence, we were presented yesterday with a beautifully printed private press book, Invisible Countries, one of the Cahiers Series published in Paris by the Center for Writers & Translators under the imprint of Syph Editions. It consists of a series of trips to seven imaginary – ‘invisible’ – countries by the American writer, Sylvia Brownrigg and is illustrated by magically beautiful photographs and paintings of landscapes, clouds and mountains by Tacita Dean. It makes me look forward to the third part of her trio of exhibitions which will be on Landscapes and will open at at the RA at the same time as our new building on May 19th.

I went down to Oxford yesterday to do a double act with the President about our new building in Burlington Gardens, including the PRA talking about his display of the Academy’s early collection. Many of the questions related to the nature and status of the collection: the fact that it is rich not just in the so-called diploma works – works given by Academicians at the time of their election – but supplemented by other gifts over the years, by early Academicians wanting to ensure their place in its history, and by descendants of Academicians, including Gainsborough’s unmarried, younger daughter, Margaret, who gave her father’s Self-portrait, and Constable’s middle daughter, Isabel, who gave the Cloud Studies, which, together with the Gainsborough, will be amongst the treats of the new Collections Gallery. One of the questions related to why these works have not previously been visible. Part of the answer is that they used to be displayed (I assume) in the so-called Diploma Galleries which were added by Sydney Smirke on the attic floor of the original Burlington House, but which were abolished by the creation of the Sackler Galleries. The other part of the answer lies in the ambiguity of the Academy towards its history, as reflected by its decision to turn down the acquisition of Joshua Reynolds’s collection when it was offered them at a knockdown price not long before his death. All of this is set to change not just through the opening of the new Collections Gallery, but also the imminent publication of The Royal Academy: History and Collections, ed. Robin Simon and MaryAnne Stevens which provides a comprehensive study of all aspects of the Academy’s history and collection, such that it will be very hard to ignore in the future.