In response to Marina Vaizey’s comments about Helmut Gernsheim and the fine photographs he took during the war of details of the fabric and tombs of Westminster Abbey and St. Paul’s (and 10, Downing Street) for the National Buildings Record, he is indeed a fascinating figure:  trained as an art historian and then, at the suggestion of his older brother, who was an art dealer, at the Bavarian State School of Photography, he came to Britain, where he worked as a commercial photographer, in 1937.   On the outbreak of war, he was interned, sent to Canada, but the ship was diverted to Australia where he was again interned at a camp on Hay.   He was only released by volunteering to work for the National Buildings Record, where he pioneered a new approach to photography, based on his book New Photo Vision.   It was the product of lectures he had given to his fellow interns.

Just back from Cold War at the Rich Mix – an amazingly intense depiction of the state of the arts in Poland under Soviet domination, full of fake folk ethnicity, and of the difference between the free world (France) and Soviet control in Poland, all filmed in black-and-white, which catches the era (and aura).   Highly recommended.

I have been making my annual, largely futile, effort to clear the pile of books which accumulate on the floor of my study.   The only benefit, apart from a modicum of improved tidiness, is the discovery of books which I bought and then forgot about, or never had a chance to read.   One of these is John Summerson’s short account of the foundation of the National Buildings Record, published to celebrate its fiftieth anniversary in 1991.   He gives a good description of how government was galvanised into action to provide a full photographic record of historic buildings which were about to be bombed and of how he became its founding Deputy Director on 6 January 1941.  I think I may have bought the book in search of information about the work Bill Brandt did for the NBR.   He was hired in 1941 to undertake a survey of Cathedral monuments.   The caption to his photograph of the Dean Fotherby Monument in Canterbury Cathedral says that ‘some of his images evince an eye not normally found in the work of those who merely document’ which sounds as if it could have been a double-edged compliment.   Helmut Gernsheim was meanwhile taking his amazing photographs of tombs in Westminster Abbey which, I think, are still in files in the Warburg Institute.

While I’m on the subject of converted industrial buildings, I walked past the old Allen & Hanburys building just to the west  of the Cambridge Heath Road a week or so ago.   It’s another old established East End firm, bought up in 1958 by GlaxoSmithKline, with the factory closed some time in the 1960s.   It was founded by a Welsh Quaker, Silvanus Bevan, in 1715.   The eponymous William Allen joined the firm in 1792 and his second wife was a Hanbury.   They made those blackcurrant pastilles in a tin box which used to be sold under the name Allenburys, but are now made in Switzerland;  also, cod liver oil and weighing scales:- 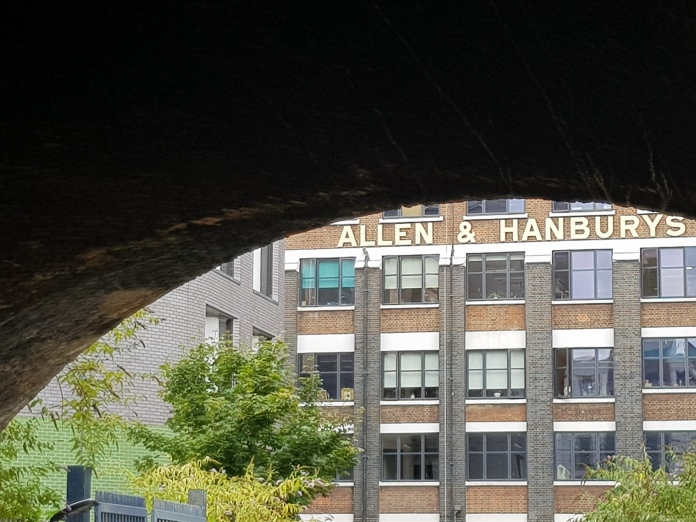 People forget that London was full of small, and larger, scale manufacturing.

We have just come back from a matinée performance of Benjamin Britten’s Paul Bunyan by ENO in Wilton’s Music Hall – a strong and intense performance with a vast cast, but to me a bit baffling because I hadn’t had a chance to read the synopsis and had forgotten that the very English Britten, like Auden, went to New York in the early stages of the war, which is where he wrote Paul Bunyan, with a score by Auden, as an operetta for performance in a high school.   This is why it is infused with a pop, but lyrical, Americanism.   Highly recommended, although probably no tickets are available.

We went last night to a party in Spratt’s Mill, a surviving industrial complex on the Limehouse Cut which was converted long ago – in 1985 – into flats.   I had no idea what Spratt’s was.   The answer is dog biscuits and Spratt’s Works was, not so long ago, the largest dog biscuit factory in the world.   In the Boer War, it made ships’ biscuits for the troops and apparently also did a lively trade in pulses, dog shampoos and monkeys.   It was closed down in 1969 when purchase tax was introduced on dog food:-

We were invited to inspect the Thornhill ceiling paintings in the Painted Hall in Greenwich before the scaffolding is struck at the end of the month.

First, it was, as always, a pleasure to see the great mise-en-scène of the Royal Naval Hospital as laid out by Wren, with the help of Hawksmoor, after its foundation by Queen Mary after the Battle of La Hogue in 1692.   The first building, which was already there, was John Webb’s earlier wing of the Royal Palace:-

Wren and Hawksmoor then added the great double flanking colonnades allowing the view through to the Queen’s House as Queen Mary required:-

On 1 February 1698, Wren was asked to ‘ lay before the Committee at the next meeting a draught and estimate of an Hall to be added to the present building in pursuance of the general design’.   On 5 April, Wren’s Clerk of Works (i.e. Hawksmoor) was instructed ‘to set out the ground’ and the detailed drawings in the Soane Museum are in his hand.

Thornhill was commissioned to undertake work on the painted hall in July 1707, after it had been plastered ‘after the best manner fit for painting’ by the appropriately named Mr. Doogood.

One enters under the Dome, which, as Thornhill himself described in his published Explanation of the Painting in the Royal Hospital at Greenwich (London, 1726), has ‘the four WINDS painted in Stone Colour’:- 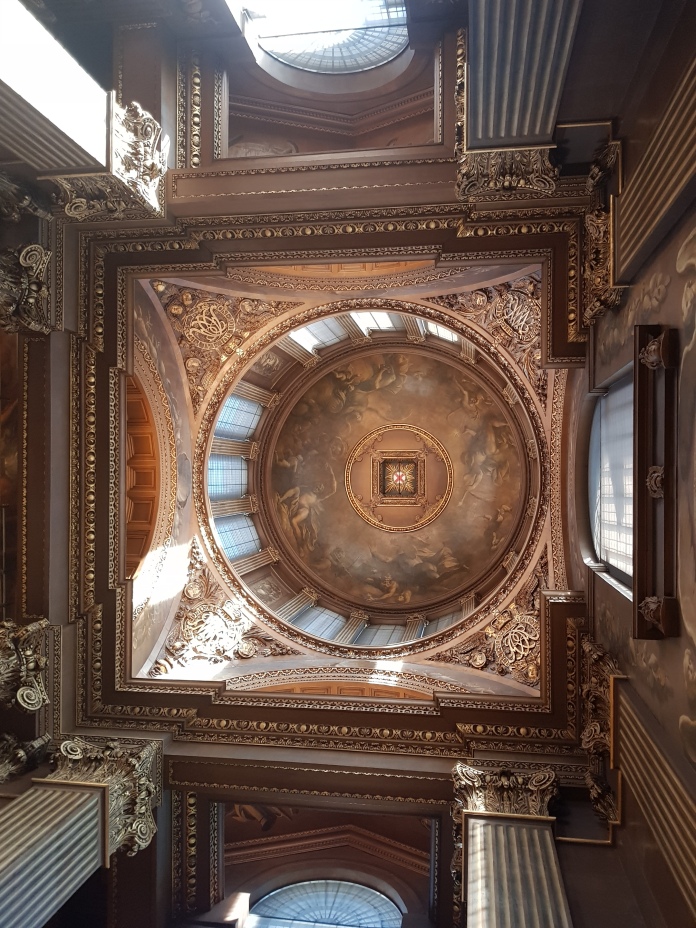 At the far end is a wall painting, already restored, which shows George I ‘leaning on a Terrestial Globe’:- 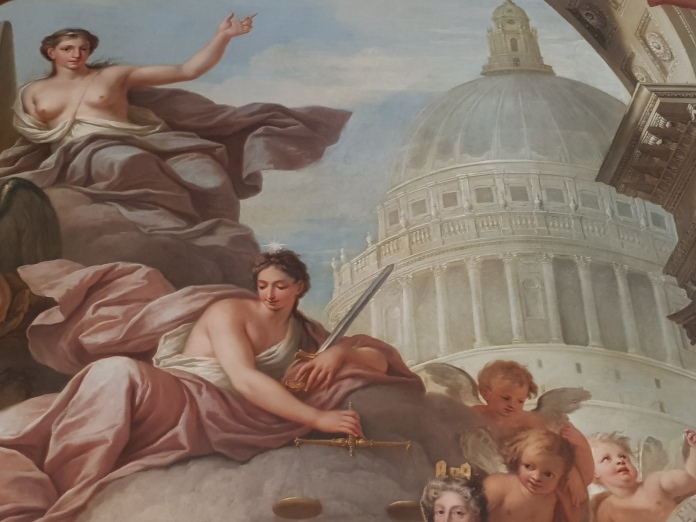 Thornhill himself is present in the lower right:- 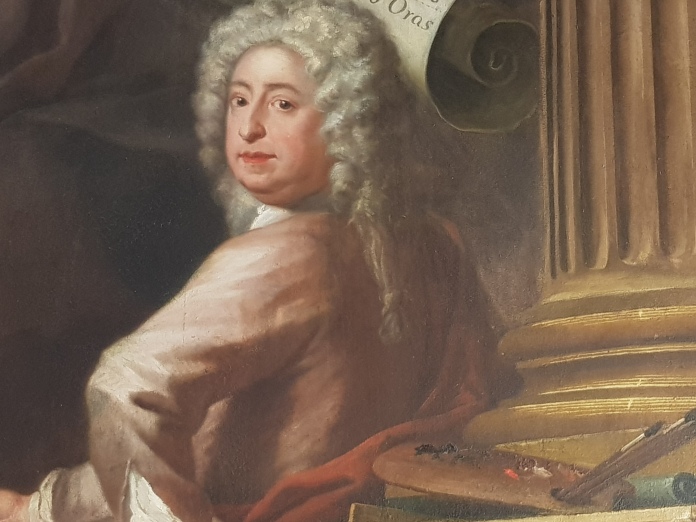 As one climbs the scaffolding up onto the roof, one sees the incredibly high quality of the carved decoration:-

But, also, that Thornhill (or his assistants) was a much better painter than history generally allows him to have been:-

Queen Mary has the unexpected feature of the name of her late eighteenth-century restorer written on her breast:-

In the new gallery at Charleston, there is an exhibition about Orlando, published in October 1928, suggestive of its subsequent influence on artists.   There is one deeply unexpected object, the copy of the book owned by Vita Sackville-West’s mother, Victoria, with the inscription as below:-

I was keen to go to the opening of the new Charleston Barns project, having been involved over many years (from 1993 till, I think, 2014) as a Trustee.   The first proposal for expansion in 1993 was vetoed by the Trustees.   Energies were concentrated instead on securing the conservation of the house.   But as time went on, it became clear that the pressures of agribusiness might overwhelm the character of the house and that it was essential to secure the barns – to use them as a supplement and decoy to take pressure off the house.   As was announced this week, people can now visit year round.

The competition was won by Jamie Fobert in conjunction with Julian Harrap, a conservation architect who is the best person at retaining the old in combination with the new, as he has done so successfully at the RA, both in The Sackler Wing and Burlington Gardens, and now likewise at Charleston.

Next door is the old medieval barn, now restored, with a large performance space, plus restaurant:-

The integrity of the house and experience of it, meanwhile, remains intact:-

And of the garden:-

One of the thing’s I learned at Colin Amery’s funeral, apart from details of his hyperactive social life, was that the vicar had wanted to demolish Holy Trinity, Sloane Square in the early 1970s to build a block of flats and that it was only thanks to the campaigning zeal of John Betjeman assisted by Gavin Stamp and Colin Amery that this was prevented.   I have also learned that when said vicar wanted to cancel early communion, he was prevented only because amongst the small number of communicants were the Earl of Cadogan, John Betjeman, the ex-Archbishop of Canterbury and Princess Margaret.   Hard to imagine.