I don’t remember seeing this portrait of Hugh Casson in the exhibition we did about him last year.   I really regret never having met him as his memory lives so strongly still at the RA as the President who revived its fortunes in the late 1970s, not least by founding the Friends in 1977.   He is said to have brought the Queen Mother to hanging lunches.   The portrait shows him little and neat, eyes glinting behind his glasses.   It’s painted by Bernard Dunstan, who became an RA in 1968 and is still one aged 94.

In honour of this afternoon’s meeting of the General Assembly, I am posting the ceiling painting of the room where the  meeting will be held .   But how many of us will look at it ?  Ricci was one of those decorative painters who came to London in the eighteenth century in search of lucrative commissions.   One can see why he was so popular.   It’s got a certain swish and swagger, animating the scene from Ovid whereby Bacchus, accompanied by assorted satyrs, discovers Ariadne alone on the island of Naxos:

Here are some details: 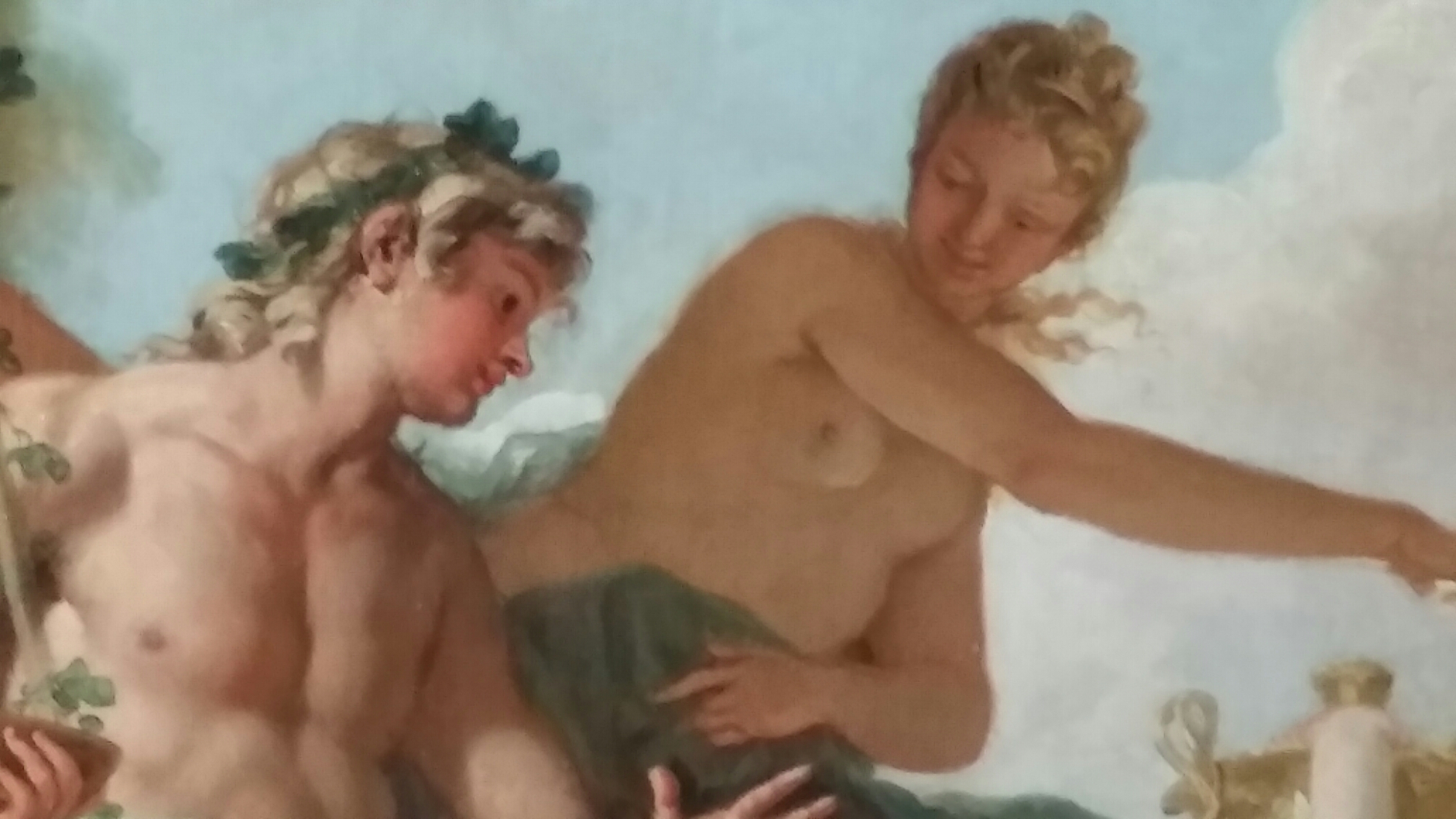 END_OF_DOCUMENT_TOKEN_TO_BE_REPLACED

I have fallen behind on my choice of paintings for the Director’s Cut of the Public Catalogue Foundation.   I wanted to include Jean Cooke’s self-portrait entitled Et jamais je ne pleure et jamais je ne ris (it’s a phrase from Baudelaire’s Fleurs du mal) because, when I arrived at the Royal Academy, she dominated the meetings of the General Assembly.   Extremely small, she had a squeaky voice.   Whatever she said was treated with awe.   She lived in a cold cottage in Birling Gap, had been married to John Bratby (of kitchen sink fame) and once drove a Morgan. 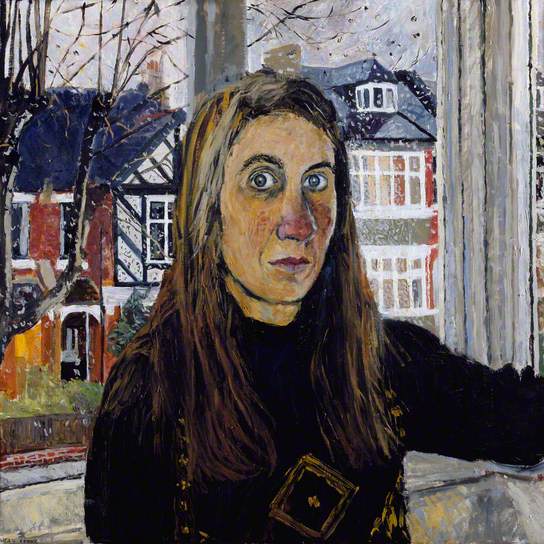 Tonight, I was asked to say a few words to a group who were about to have dinner in the Royal Academy Schools.   I thought they might find it interesting to have a look at the picture which Johann Zoffany painted of the St. Martin’s Lane Academy not long after he arrived in London from Germany in 1760.   I hadn’t looked at it carefully myself.   What it shows is the most important academy in London before the Royal Academy itself.   It was based in a courtyard off St. Martin’s Lane, was much more democratic than the Royal Academy (the subscription was two guineas for the first year and a guinea and a half thereafter), and more casual, a drop-in centre for evening classes in drawing.   The person in the front looking out at the spectator is George Michael Moser, a Swiss artist who was committed to the community of artists and became the first Keeper of the Royal Academy.   In the background, putting equipment away in a cupboard, is John Malin, who was the first member of staff of the RA.

I’ve been told that my choice of works for the Director’s Cut on the Public Catalogue Foundation is too historical and doesn’t sufficiently convey the character of the contemporary Royal Academy.   So, I’m going to add Michael Craig-Martin’s self-portrait, which he gave as his diploma work in December 2007.   I like the fact that it’s a self-portrait.   I remember one of the RA’s saying how delighted he was that portraits had been eradicated from the Summer Exhibition, so Craig-Martin is characteristically going against the trend.   I admire his intellectual rigour and independence of mind, so this is an unashamed tribute: 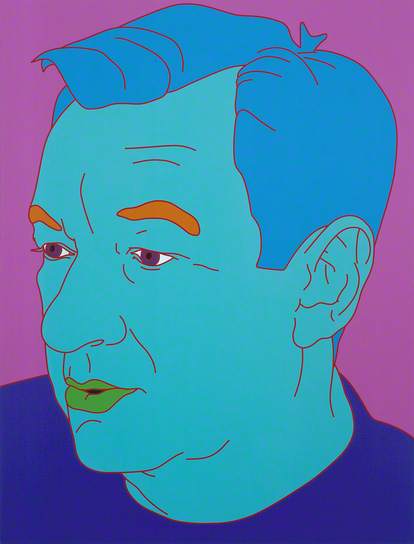 In honour of the many Friends of the Royal Academy who have kindly looked at my blog today (I’ve had record numbers of visitors) I am doing a second post related to the history of the Summer Exhibition.   It’s a picture of the process of selection as painted by Charles West Cope in 1875.   It’s one of the stars of the exhibition of our collection currently on in Bendigo outside Melbourne, Australia (see previous blogs).   It tells one so much about the nature of the high Victorian RA.   The artist was named after Benjamin West (his sister was named after Turner) and he was Professor of Painting in the Royal Academy Schools.   He is in the background, bald and bearded.   The then President, Sir Francis Grant, leans back in his chair, whiskered and supercilious and wrapped in a rug.   In the front, Millais has taken off his top hat and put it on the floor in front of him.   My predecessor, Sir Frederick Eaton, is dutifully taking notes.   The whole scene exudes a sense of the authority that the Academy held in 1876, when the Academicians were all wealthy, selling their works to industrialist and nouveau riche collectors.

This is the season when the annual Summer exhibition is hung.   Wandering round the galleries in the morning, members of the committee are busy with the difficult task of selection of pictures and sculpture for whichever room they are hanging, intent on doing the best for the Royal Academicians, their peers, for the open submission, and, not least, for the public.   Each year I am impressed by how deeply seriously they take it – how to make the best possible display, how to show as many works as is practical without overloading the rooms, how to balance works by known artists and unknown, how to grapple with the tricky individual works.   At 11, they are fortified by beef tea (reputedly, a mixture of sherry and bones).   By lunchtime the artists involved in the hanging need fortification.  They retreat to the General Assembly Room.   This scene of Academicians having lunch during  the hang was painted by Frederick Elwell (he’s standing up on the left) in 1938, lots of old men sitting round the table with their cigarettes and cigars.   Nowadays lunch is quicker and much less formal, self-service and tough beef.   It concentrates on the problems of the hang, but also includes a bit of RA gossip, which is why I always like this time of year.

My second choice of painting from the RA’s own collection is going to be the picture of Humphrey Brooke, one of my predecessors as Secretary.   He died in 1988, but his widow, Nathalie, is still very much alive and comes to events.   He came from a grand Yorkshire family, was a so-called Monuments Man during the second world war, worked in Austria after the war where he met Nathalie Benckendorff, was deputy director of the Tate, and became Secretary of the RA in 1952.   He suffered from manic depression and believed it could only be cured by sex and smoking.  His portrait by Olwyn Bowey shows the latter, a man of the establishment, comfortably enjoying a fag. 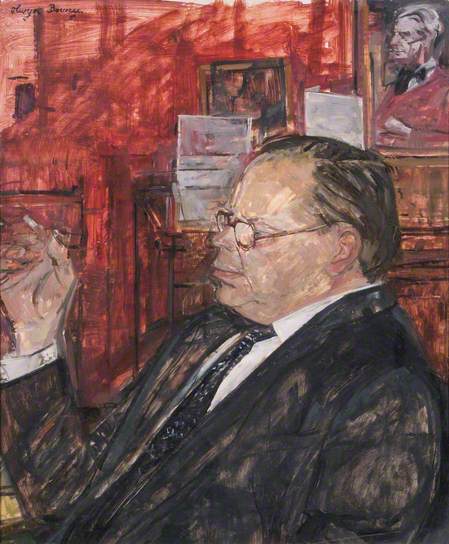 I have been asked to select my ten favourite paintings from the collections of the Royal Academy as a way of advertising the benefits of online browsing of the collection on the BBC website Your Paintings (http://www.bbc.co.uk/arts/yourpaintings/).   I initially thought that I would just choose the ten most famous paintings, partly inspired by seeing so many of them displayed in the exhibition, Genius and Ambition, in the grand Victorian galleries at Bendigo in Australia.   But you don’t necessarily need the website to find out about Constable’s Leaping Horse.   What I like about the website is that it is easier to find out about paintings that even I did not know existed because they are kept in store (once we have our new building open in Burlington Gardens I very much hope that more of them will be shown).

I thought that I would start with a painting which I found myself looking at during a long meeting earlier this week.   It’s attributed to Zoffany, but not entirely convincingly (1781 was the year he exhibited his great group portrait of the The Sharp Family) and shows The Antique Room of the Royal Academy at New Somerset House (03/846).

It shows a group of students drawing from the already extensive collection of classical casts – the so-called Plaster Academy – not long after the Royal Academy’s new building was opened in Somerset House.   The now ageing Keeper, George Michael Moser, is said to be overseeing the class, but it doesn’t resemble the caricature of him by Rowlandson.   The picture has an earnestness to it which gives a sense of the appeal of the Academy in its early days, the opportunity to learn to draw by candlelight under the supervision of established artists and with their guidance, and their passionate interest in copying from the antique.