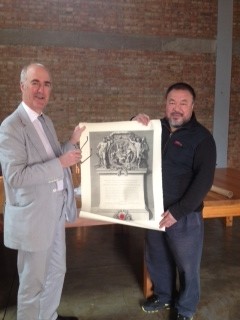 We took Ai Weiwei’s diploma to his studio in a house somewhere in the deep outskirts of Beijing.   He was elected an RA a couple of years ago, just after he came out of prison, but we don’t like to consign the diploma to the vagaries of the international post.   It was unexpectedly moving handing it over to him.   He asked how many there are.   The answer is not many, about 25, because we are only allowed to elect two a year, and we don’t always remember those two.   He is the first Asian artist.   I read out the Obligation, which I luckily remembered was printed in the copy of my book which I had brought to give him, although I’m not convinced it was strictly necessary.   He spoke impressively, quietly and with great authority about his work as an artist internationally, with smaller organisations as well as large, about his display at the Tate and his friendship with Herzog and de Meuron;  and also about the difficulties of developing a creative temperament under the very strictly competitive system of Chinese education.   As we left, Uli Sigg arrived, who started selling lifts in China in the 1970s, was the Swiss ambassador in Beijing in the 1990s, and has presented his collection to M+, the new Museum  in Hong Kong, including 25 works by Ai Weiwei.