We had dinner tonight in the Lotos Club, a new one for me, but familiar to most of the other guests.   It was founded in 1870 for literature and the arts, taking its name from a poem ‘The Lotos Eaters’ by Tennyson.   It occupies a grand French Renaissance mansion, designed by Richard Howland Hunt, on 66th. Street, and I was told that it had louche paintings downstairs in the Grill Room.   They’re not very louche, but the Grill Room is certainly well worth seeing. 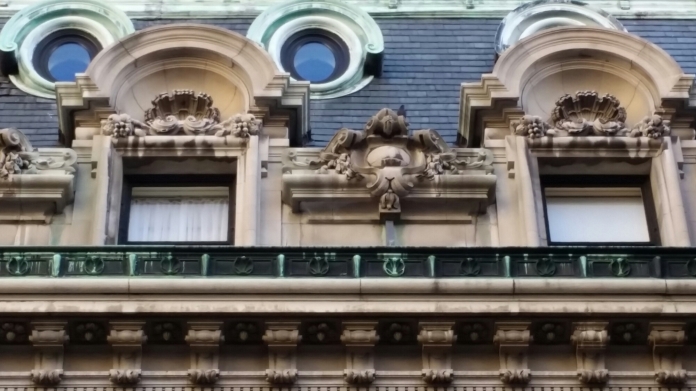 END_OF_DOCUMENT_TOKEN_TO_BE_REPLACED

I regard no visit to New York as complete without spending a bit of time in the Frick, snatched between meetings.   I don’t think that there is any collection which has quite the same combination of great art and shared ownership.   I love it all – the slightly hushed atmosphere, the posh lady at the ticket desk.   I particularly love the array of Gainsboroughs in the Dining Room, including The Mall in St. James’s Park (he’s so much better at atmosphere than Reynolds), and the combination of pictures in the so-called Living Hall in the middle – Bellini’s St. Francis in the Desert, El Greco’s St. Jerome, Holbein’s saintly Thomas More facing his surly Thomas Cromwell and Titian’s Portrait of a Man in a Red Cap.   Not to mention the predella from the Maestà.   Where else can one see such a group of pictures in a semi-domestic space ?

This is the Frick from outside: 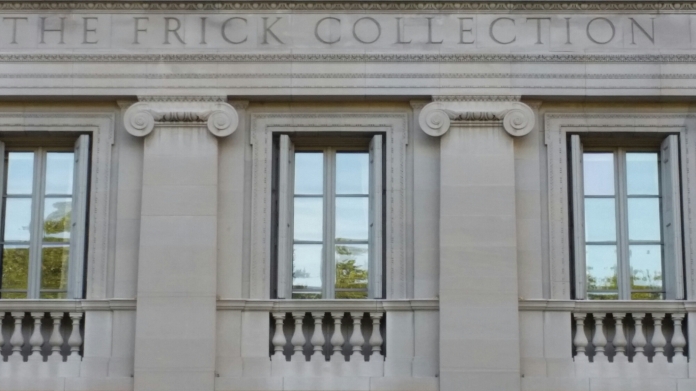 END_OF_DOCUMENT_TOKEN_TO_BE_REPLACED

I was pleased to see the Whitney before it goes downtown into a building by the Highline, while the original Marcel Breuer building is transferred, at least temporarily, to the Met.   The building is such a muscular and intense piece of brutalism, if such a description is appropriate to the work of one of the high priests of Bauhaus modernism: 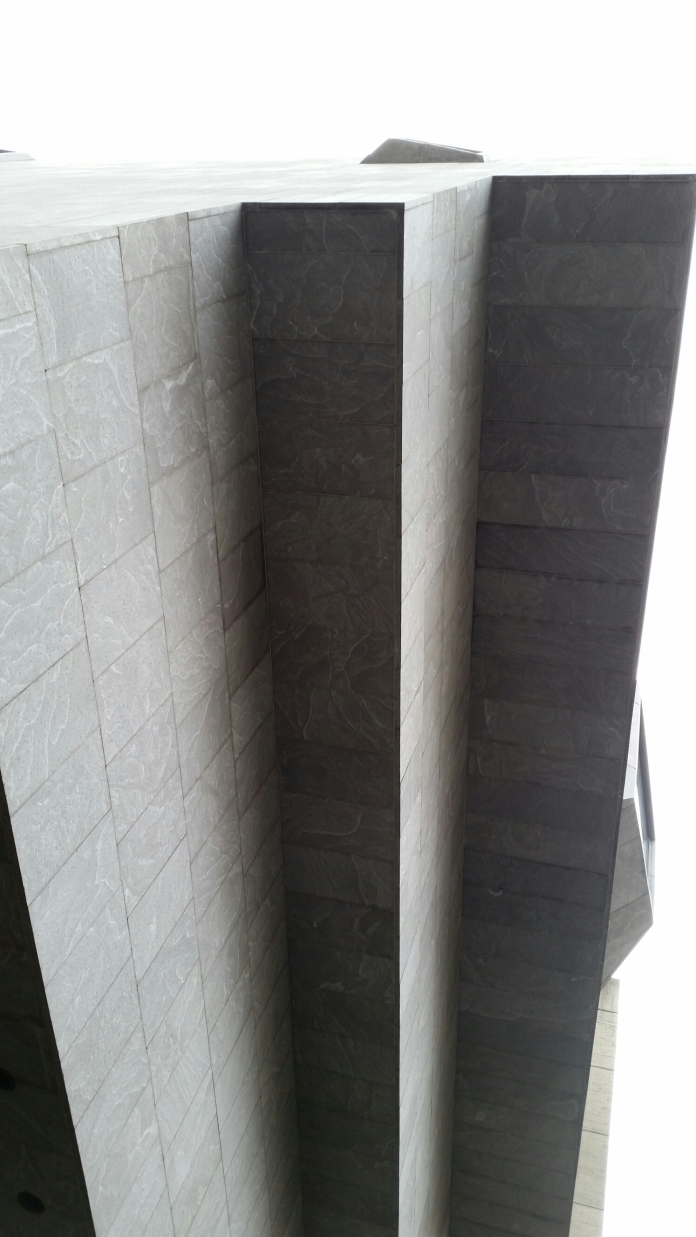 By special request, I am including an additional photograph of the entrance façade which is more legible:

END_OF_DOCUMENT_TOKEN_TO_BE_REPLACED

I had lunch today with someone who whenever he is in New York has lunch in the Four Seasons Grill.   I can see why.   Even if Philip Johnson no longer occupies the corner table and Henry Kissinger is no longer holding court, it still has the atmosphere of 1960s power lunching.   I had bison which I’ve never had before.   The curtains shimmered as they have done ever since they switched on the air conditioning.   Only the Picasso tapestry was missing because they removed it on Saturday to the New York Historical Society.   This is the room: 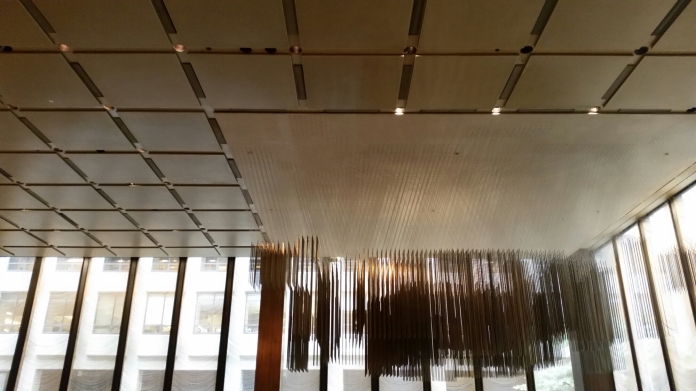 These are the window curtains: 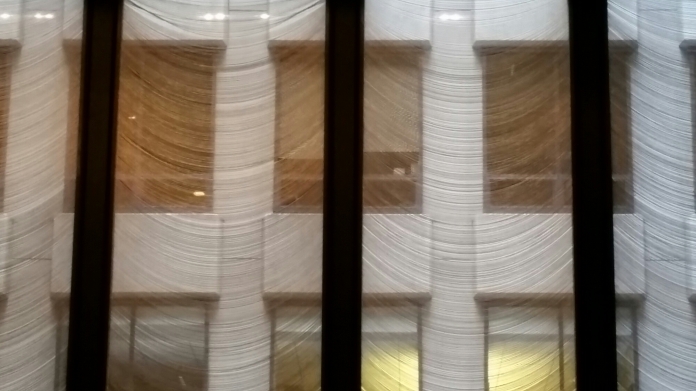 END_OF_DOCUMENT_TOKEN_TO_BE_REPLACED

We stopped at Stonington, remembering (correctly) that it is a pattern book New England town, reflecting the prosperity of this part of the Connecticut coast in the late eighteenth century, based on fishing, whaling and, most especially sealing, and full of affluent merchants’ and sea captains’ houses.   This is the town library: 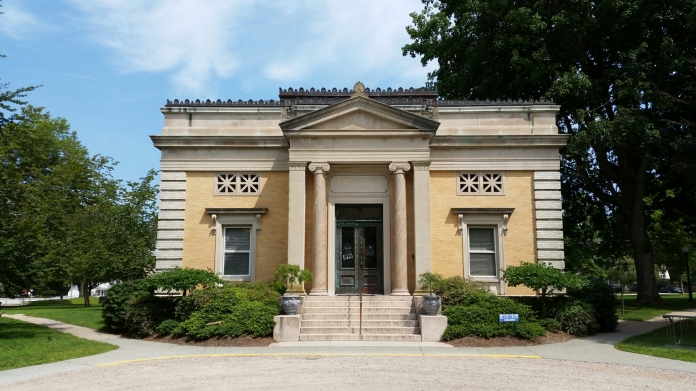 END_OF_DOCUMENT_TOKEN_TO_BE_REPLACED

Our last port-of-call was Jamestown on Conanicut Island sandwiched between Newport and Providence, Rhode Island in the middle of Narragansett Bay.   It’s low-key, half rural, half suburban, a small-town, civic-minded community of playgrounds and health food stores, an arts center in an old boat shed with a pottery and exhibition of art based on paper.   Retired bankers and investment analysts live where they used to have their summer homes and where they can get their daily skinny latte and focaccia.

With a little bit of time to spare in New Haven, I thought I would walk to the building I remember most vividly from our last visit:  the Temple Street parking garage by Paul Rudolph, designed in 1961 in a style of tough and rhythmic, free style brutalism.   It’s a hymn to the age of the car park: 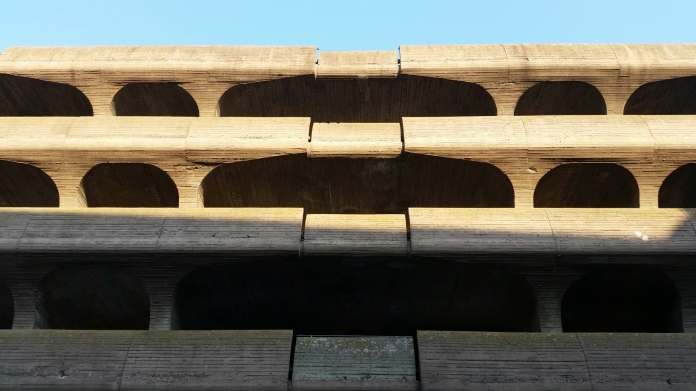 I have been pondering the subtext of Elisabeth Fairman’s exhibition as to whether it was mainly women who documented their experience of the natural world.   I don’t think it was mainly women who joined all those field clubs, who went out into the countryside with their microscopes and butterfly nets and hammers.   It was the earnest middle classes, especially the clergy, who were inspired by the writings of Erasmus Darwin and thought that it was a necessary accomplishment to know and understand and document the natural world (it was God’s world).   But not any more.   I was once given a butterfly net.   But there were no butterflies left to catch.

Elisabeth Fairman, the curator of rare books at the Yale Center for British Art, took us on a tour of the exhibition she has organised about traditions of British botanical illustration, partly inspired the Helmingham Herbal which Paul Mellon acquired and reproduced for the Roxburghe Club.   I particularly enjoyed two astonishing gouaches of two goldfinches by Peter Brown, a Danish naturalist, who apparently exhibited work as a flower painter in the early days of exhibitions at the RA.   The point of the exhibition is to show not just the work of well-known artists, although there are plenty of those, but more the drawings and illustrations of passionate amateurs and enthusiasts who went out into the countryside to record the natural world.   They include, for example, a Miss Rowe who arranged botanical specimens in envelopes illustrated with appropriate watercolours for a competition organised by the Liverpool Naturalists’ Field Club.   I had never seen watercolours by William Henry Hunt, known as birds-nest Hunt, whose work was much admired by Ruskin:

END_OF_DOCUMENT_TOKEN_TO_BE_REPLACED

We followed the precepts of another of my favourite American books (alongside Roadfood), which is Road Trip USA:  Cross-Country Adventures on America’s Highways.   We took Route 8 down nearly all the way from North Adams to New Haven, down through the wooded hills of western Massachusetts and into rural Connecticut through small towns including Becket and Otis.   The principle of the book is straightforward:  avoid all Interstate highways, which plough through the countryside ignoring the contours of the land, and instead take the older roads which criscross America and retain the relics of an older industrial and pre-industrial culture, through small towns, past barns and farms and houses which have seen better days.   We used the book to travel from Chicago to San Francisco and have adopted the idea of it ever since. 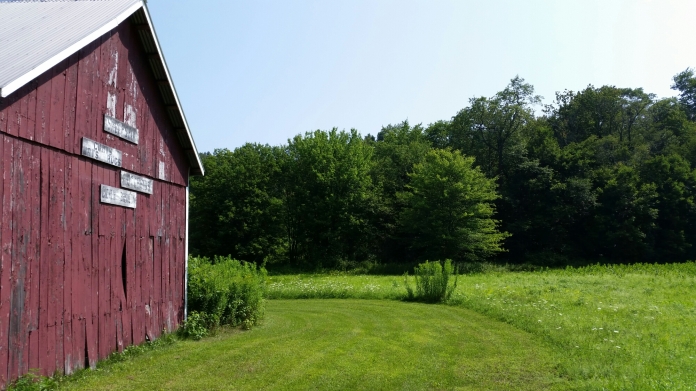